In no surprise to anyone paying even marginal attention, the FBI’s clearing Hillary Clinton of wrongdoing in its briefly reopened investigation — however, the time it took the agency to reach this conclusion is not only bereft of logic and reason, it constitutes the most hubristic of insults to the public’s intelligence.

In just 691,000 seconds from announcement to conclusion, FBI Director James Comey wants you to believe that agents thoroughly examined over 650,000 emails newly ‘discovered’ on Anthony Weiner’s computer — including any threads resulting, as well as all attachments — before deciding Clinton innocent of wrongdoing.

We, the people of this planet, are just not that stupid — nor are we even mildly amused by this farcical bullshit passed off as a credible investigation.

Indeed, the lightning pace of this putative second investigation not only boggles the mind, it forces uneasy questions concerning the true motivation and apparent exceeding necessity to ensure Hillary Clinton walks away scot-free amid rapidly mushrooming evidence of flagrant corruption and mendacious collusion.

Just a cursory comparison of two investigations shows such marked differences it would be impossible not to question legitimacy of the FBI’s findings.

In the summer of 2015, the FBI commenced its first probe into the former secretary of state’s use of a private email server during her tenure in office, after John Giacalone — then Director of the National Security Branch — met with Comey to voice concerns emanating from the Intelligence community about classified information possibly handled carelessly.

For nearly a full year — 365 days, or 31,536,000 seconds — a sizable task force of FBI agents pored over an enormous cache, first comprised of 30,000 emails, but later totaling 44,900 after additional documents not originally handed over by the Clinton camp to the State Department were discovered.

This means — rounding off the rough estimate of one year — the Bureau combed an average of just over 123 documents every day.

While that might seem to be manageable with a slew of investigators on the job, a basic comparison of the two probes proves the literal inanity of the reopened investigation.

Later in the day on October 28, Comey announced the commencement of the secondary probe — albeit to the consternation of current and former officials who felt his telling Congress broke a number of investigatory guidelines, including possibly influencing the outcome of the presidential race.

According to Comey, an additional 650,000 documents located on the computer of Clinton aide Huma Abedin’s now-disgraced and estranged husband Anthony Weiner deserved careful scrutiny for pertinence and relevance to the original investigation of the Democratic nominee.

Public and official speculation predicted a months- or years-long investigation, even with substantial manpower dedicated to the task.

But on Sunday, November 6, in yet another shocker of an announcement from the FBI director, Comey inexplicably declared nothing of relevance to the Clinton investigation — “no new conclusions” — had been revealed in its secondary probe.

This means — again rounding for brevity to eight days the total length of the investigation — FBI agents inspected some 81,250 documents each day.

Granted, both estimates have been averaged and roughened, but only for comparison’s sake — and that contrast doesn’t survive the scantiest litmus test of believability.

Before the naysayers jump in with a there’s no comparison deflection, consider the following points.

Although an algorithm or program combing those documents might indeed retrieve subjects of interest to investigators — keywords, germane subjects, accordant people’s names, and the like — in no way would such technological gatekeepers reveal subtle nuance as has been displayed in emails published by WikiLeaks from Hillary Clinton, campaign chair John Podesta, and the Democratic National Committee.

Such fine gradations of meaning, naturally found in the English language but also purposefully employed to throw off investigators and interlopers, could not possibly be revealed by artificial means — at least not that quickly and particularly not with currently available technologies.

Consider that if such technology did indeed exist to that discerning level of scrutiny in our heightened and overarching surveillance and police states, no criminal would ever roam free.

Law enforcement departments and the National Security Agency together have amassed astonishingly voluminous data sets on every person in this country, including through emails and online activities. A technology advanced enough to comb for subtleties in language would home in on criminal behavior and activity with incredible frequency.

And while NSA programs have been revealed to hunt for keywords, there are limits to its effectiveness — no terrorist plot has yet been halted in progress because the intelligence to discover it hasn’t yet solidified to that point.

Technology experts immediately weighed in claiming such technology does indeed exist, is frequently employed, and can do the job perfectly in a mere eight days — no worries.

But, as WikiLeaks rebutted in a number of tweets, it isn’t quite so simple.

Emails between Clinton, her campaign staff, the DNC, and other insiders have proven to be a literal trove of revealing details — including Hillary’s use of the name of aide Huma Abedin as a deflection, and President Obama’s use of a pseudonym to communicate on the private server in an attempt to thwart future investigators.

Programs and algorithms would have to be fed such information, but not all of those pseudonyms were known — and that represents only one such complication. 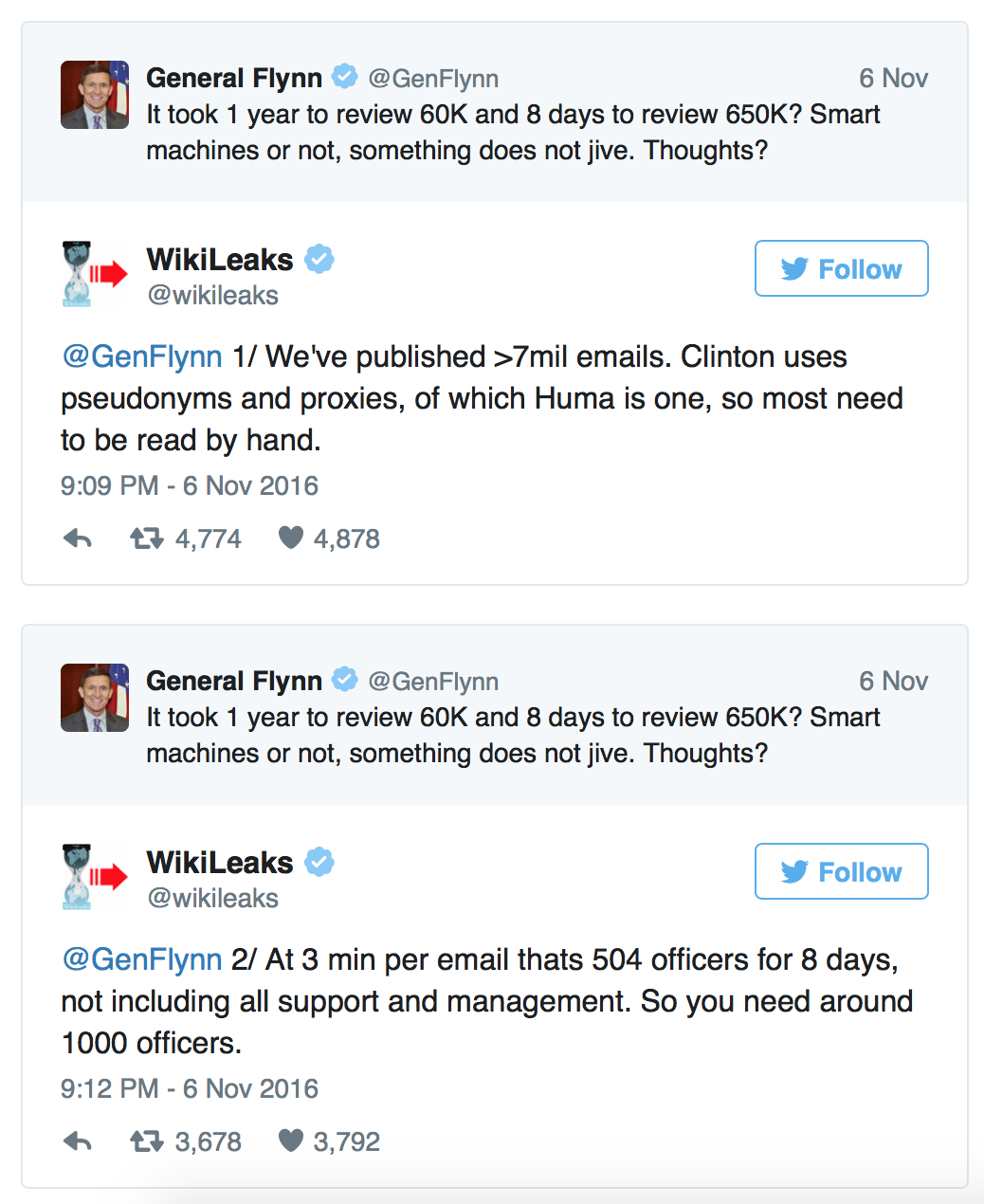 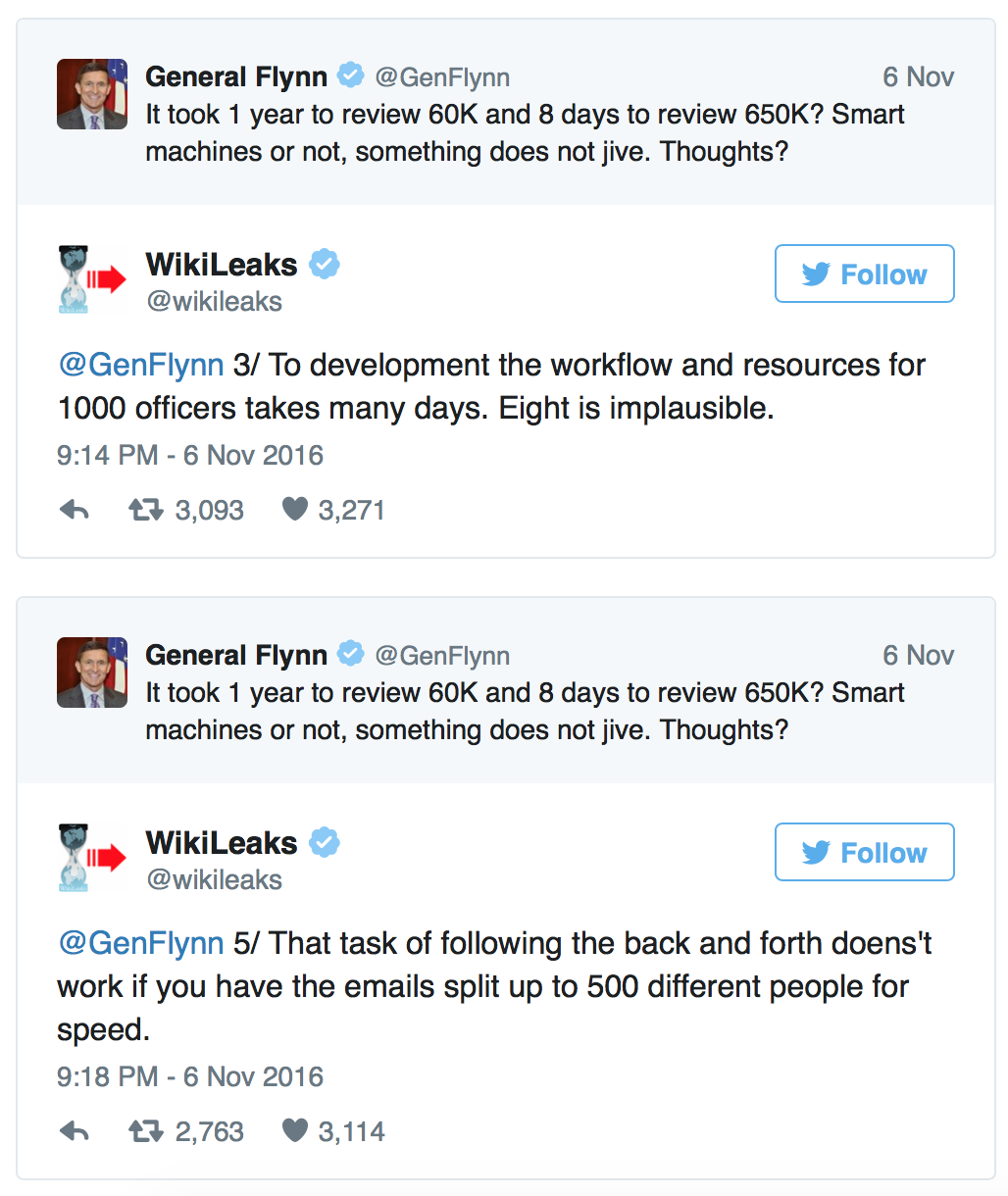 Even working around the clock, as Comey alleged the FBI did in its second probe, 82,000 documents daily isn’t even worth comparing to the 123 averaged each day in the initial investigation.

So, what are we to believe about the clearing of Hillary Clinton for a second time?

The reason most people don’t express their individuality and actually deny it, is not fear of what prime ministers think of us or the head of the federal reserve, It’s what their families and their friends down at the bar are going to think of them.