The origins of Christmas predate Christianity through the Pagan holiday called Saturnalia, which was a week-long of lawlessness from December 17th through December 25th that honored Saturn and included human sacrifice, intoxication, naked caroling and rape. During these seven days, there were no punishments for breaking any laws, according to Roman law. 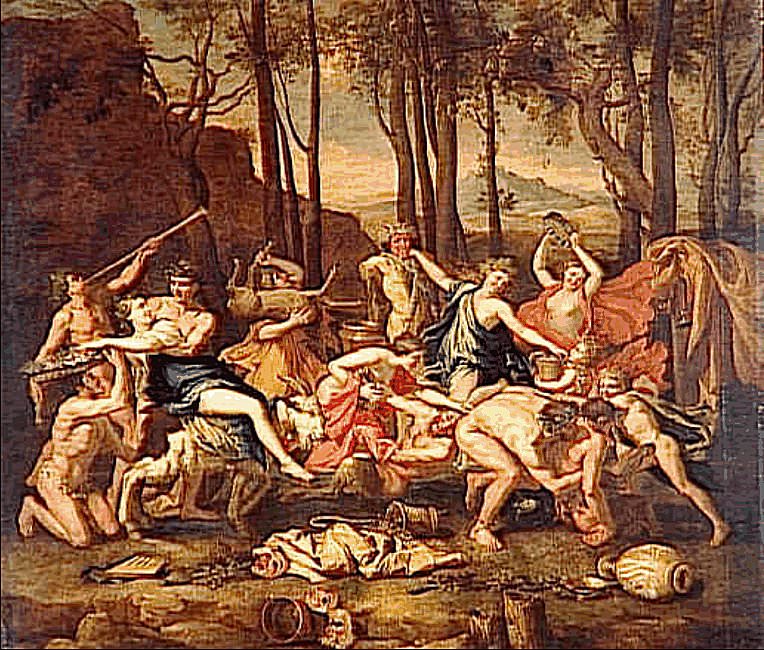 “Because of the Pagan origins of Christmas, the Puritans banned this holiday and between 1659 and 1681, Christmas was illegal in Massachusetts.”

In 1466, the Roman Catholic Church, under Pope Paul II, forced Jews to run through the city naked as a tribute to Saturnalia. According to author David I. Kertzer, The Popes Against the Jews: The Vatican’s Role in the Rise of Modern Anti-Semitism, “Before they were to run, the Jews were richly fed, so as to make the race more difficult for them and at the same time more amusing for spectators.  They ran amid Rome’s taunting shrieks and peals of laughter, while the Holy Father stood upon a richly ornamented balcony and laughed heartily.”

It is important to note that in Astrotheology, Saturn is Satan. The rings we give during a wedding ritual represent the rings of Saturn. The word Saturday originates from the Old English word that means “Saturn’s day”. To this day, many people continue to unknowingly celebrate Saturnalia through their participation in debauchery and gluttony.

Related article: Saturn – Why Are We Worshiping The Cult Of EL?

According to wiki, the etymology of Christmas stems from the Old English word of Crīstesmæsse, which literally means” Christ’s mass”.

Christmas is derived from the Middle English Cristemasse, which is from Old English Crīstesmæsse, a phrase first recorded in 1038. Crīst (genitive Crīstes) is from Greek Khrīstos, a translation of Hebrew Māšîaḥ, “Messiah”; and mæsse is from Latin missa, the celebration of the Eucharist. The form “Christenmas” was also historically used, but is now considered archaic and dialectal; it derives from Middle English Cristenmasse, literally “Christian mass”. “Xmas” is an abbreviation of Christmas found particularly in print, based on the initial letter chi (Χ) in Greek Khrīstos (Χριστός), “Christ”, though numerous style guides discourage its use; it has precedent in Middle English Χρ̄es masse (where “Χρ̄” is an abbreviation for Χριστός).

Astonishingly, Saturn is depicted in Christian art in various churches.

On the ceiling of St. Andrews church on Waterloo Street in East Sussex, there is a painting showing the sun surrounded by stars, a comet, a crescent moon and Saturn.  Keep in mind that in astrotheology, Saturn is Satan. 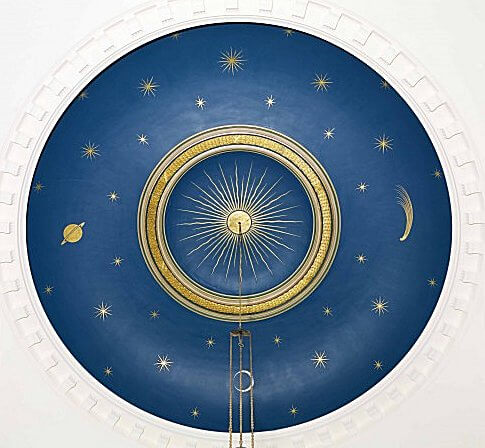 The inner circle of 12 stars most likely represents the 12 apostles surrounding the sun/son, which is another astrotheological reference for Jesus Christ being the SUN of god.  The outer circle contains 9 stars, the crescent eclipse of the moon, Saturn and a comet that appears to perhaps be diving toward the sun. The 9 stars plus Saturn may represent the 10 planets in our solar system, if Nibiru is counted as one of those stars.  The moon represents the Divine Feminine and the Virgin Mother. 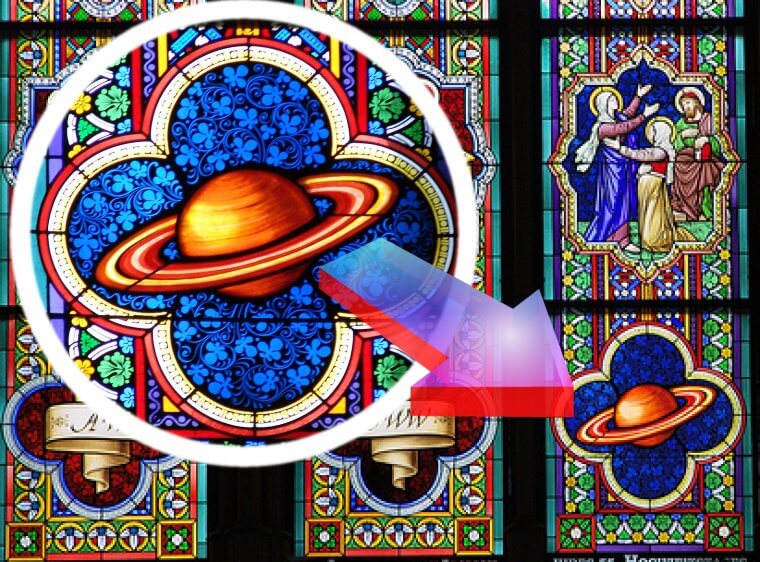 Each season is reflected by the tilt and spin of the Earth’s axis resulting with the sun being more prominent in the northern hemisphere for half of the year and in the southern hemisphere for the other half. The winter solstice occurs in winter when the sun has reached its lowest elevation reflected with the fewest amount of daylight hours and the greatest amount of nighttime hours around December 21st.

Our seasons are reflected by the amount of sun and darkness that we receive:

Pagans and Christians alike celebrate their holidays on sacred, astrological dates and Christmas is no exception. This particular holiday was has been celebrated for much longer by the ancients as one of the four great festivals that reflect each season through astrology and astronomy.

Also see:Why Is The Pope’s Mitre Shaped Like A Fish?

Esoteric Meaning of the Winter Solsitce

Various mystery schools have also celebrated the change of seasons in association with the various astrological signs that fall on the spring and fall equinoxes as well as the summer and winter solistices.

In an esoteric sense, the sun’s cycle represents your soul’s growth in consciousness along with the illumination of your soul.

To envision this, imagine that Spring is the birth of your soul.  Once you have reached Summer, your soul begins its decent from its spiritual home into incarnating to this planet. As the days begin to get shorter beginning on the Summer solstice, the decrease in sunlight represents the veil of forgetfulness where we do not remember why we came here or what our purpose is. As the days become longer beginning on the Winter solstice, your soul is released from its physical presence and makes its ascension back to its spiritual home with Source.

On the Wheel of Life, winter is the season of rest and represents preparation for renewed life, similar to how some animals go into hibernation.  It is also known as the time of germination as spring brings the flowering of plant life that follows the maturation process into summer; autumn gives us our crops (along with new seeds) and we return to winter to complete the full cycle and prepare for renewed life.

Of the four sacred directions and cardinal colors, winter is represented by the North and the color blue, which in Cherokee, literally means “cold”.

The seasons teach us a lot about the process of birth, life, death and rebirth. Alchemy provides the saying, As above, so below”.  Think of this along the lines of how we came here and how we leave this vessel.

After the sperm fertilizes the egg, we go through a maturation process that is identical to the exact number of days of both the maturation of corn from a seed along with the gestation period for a woman to give birth to a child.

The child travels down the birth canal (the tunnel) as the child is brought from darkness to birth (the light).  As confirmed through near death experiences, we follow the same process of going through a tunnel and following the light back to Source.

In a grander scheme, this cycle is repeated through seasons and our personal lives from birth to death, proving how our life is simply a mere fractal of the universe, the cosmos and ultimately, of Source.

The Winter solstice falls under the sign of Capricorn, which represents materialism and ego.  In astrotheology, this is the time when Jesus (the Sun) indulges in materialism (Capricorn) after leaving his father’s home. It is also the time when Jesus (the Sun) dies on the cross (where the sun remains on the Southern Cross constellation) for three days, only to be reborn again (as the days begin to get longer after this 3 day period).

What religion fails to teach us are the esoteric and occult meanings of the equinoxes and solstices.

Adepts of mystery schools and practitioners of the occult sciences can also attest to the cosmic currents and life force of each season. The following excerpt from Esoteric (Soul) Astrology best explains this process:

All of nature responds to these currents. It is only the human family that has forgotten, because it can no longer see the inner side of reality. The light forces are moving either toward or outward from Earth. This is what creates our seasons. The path of the Sun is intricately involved in the movement of the light currents that fall to Earth.

We can minister to our own personal psychology if we attune ourselves to the influences of the different radiances of light falling to Earth each month and during the solstices and equinoxes. Light waves descending to and ascending outward from Earth are an occult fact, meaning an inner reality not seen by most. Those of us desiring a more complete communion with spiritual forces must come to intelligent terms with this reality, for it is the movement of these ever-changing currents of light poured upon Earth that provide our evolutionary growth. These surges of power propel all kingdoms on Earth upward, lift the spinal spirit fire of the body into the heart and head centers, and have the effect of providing illumination for those of us who have prepared through intelligence and intention to participate.

The Winter Solstice has historically been the time of birth for all of Earth’s great teachers. Because it is the time of new light for the planet, World Teachers choose this particular time to incarnate because they always bring with them a new teaching. This teaching is a new state of illumination for the people of Earth. Winter Solstice occurs on December 21, the same time that the planetary keynote changes from Sagittarius to Capricorn. At the time of the Winter Solstice, the light currents submerged within the core of the Earth reverse and change course, just like the Sun, which is reversing its southward course and turning northward. A reverse movement of any planetary body creates a powerful force until the new motion or path stabilizes. Therefore, from December 21 to midnight on the morning of December 25th, there is a powerful force field of light and radiation enveloping the Earth.

While people argue over ethnic sensitivity issues between saying “Merry Christmas” versus “Happy Holidays”, the truth dates back much further than its Christian beginnings.  The intent of Christmas seems to be the overriding value behind its true, esoteric meaning or its Pagan origin. A symbol or celebration is only as powerful as the intent behind it. While Christmas has become the biggest holiday that supports the corporate world which in turn, lobbies against our civil rights, it also is a time of giving and being with family.

Sending you all infinite LOVE & Light!

In5D PATREON: https://www.patreon.com/in5d Add YOUR name to our In5D Wall of Gratitude with a minimal donation on Patreon!

Gregg Prescott, M.S. is the founder and editor of In5D and BodyMindSoulSpirit. You can find his In5D Radio shows on the In5D Youtube channel. He is a visionary, author, a transformational speaker, and promotes spiritual, metaphysical and esoteric conferences in the United States through In5dEvents. His love and faith for humanity motivates him to work in humanity’s best interests 12-15+ hours a day, 365 days a year. Please like and follow In5D on Facebook as well as BodyMindSoulSpirit on Facebook!