Five sets of human skeletal remains have been discovered by investigators in Peru and, surprisingly, two of the five have elongated skulls. The find has been made in an area where this type of skull has never been found before. To add to the story, local knowledge speaks of a race of ‘Gentiles’ (pronounced ‘jenteelez’), who were larger than the indigenous people living in the region.

The History of Elongated Skulls in Peru

Throughout history, many cultures have artificially deformed the skulls of babies in order to achieve a flattened or elongated shape, which was often associated with the ruling or elite classes . Examples of this artificial cranial deformation (ACD) have been uncovered in Australia, the Middle East, Europe, Russia, and the Americas from ancient times, as well as Oceanic and African tribes in modern times. When examined, most of these skulls exhibit features common to modern skulls, such as 3 cranial plates and sutures, as well as a brain size of around 1200-1400 cc.

But in 1928, Julio Tello , a Peruvian archaeologist, came across extraordinary elongated and oversized skulls in a cemetery in Paracas, Peru. These skulls had a cranial capacity that far exceeded the norm for modern humans. 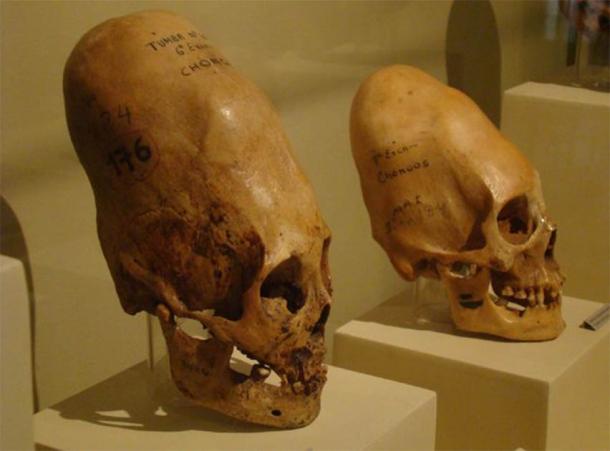 These examples were baffling due to their size and unorthodox structure , and remain so to this day. In fact, DNA testing performed in 2014 perhaps just muddied the water more, when a geneticist reported that they have mitochondrial DNA “with mutations unknown in any human, primate, or animal known so far”. And then later testing at labs in Canada and the USA claimed they were from “the Haplogroup (genetic population group) of H2A, which is found most frequently in Eastern Europe, and at a low frequency in Western Europe.”

So when it comes to elongated skulls in Peru, there is clearly much more work needed in order to reach any conclusions regarding how or what has caused the misshapen forms and abnormal capacities.

The recent find involves examples of skulls that seem to have roughly normal capacity but are misshapen. What is most exciting about this find, however, is the location of the discovery.

Locations of Elongated Skulls in Peru

Paracas is a desert peninsula located within Pisco Province on the south coast of Peru, and the skulls there are known to range from 2800 to 800 years old. An example found in 2015 was a mummified baby’s skull with an enlarged cranium . This finding is suggestive of a genetically elongated skull since the process of ACD takes at least 6 months to produce the desired effect. 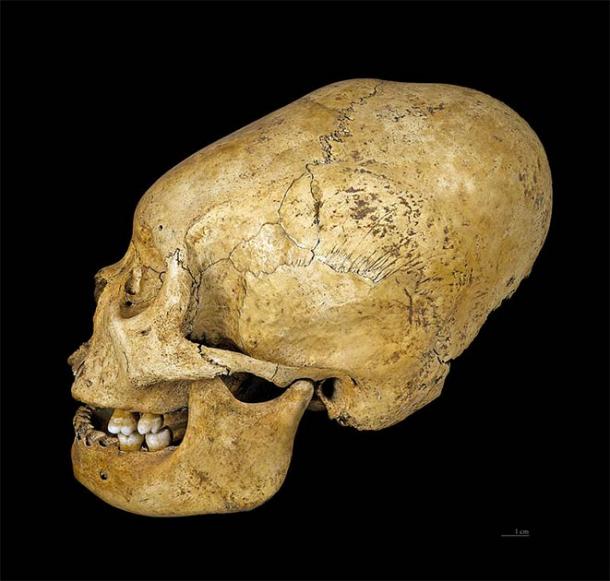 The elongated skulls discovered by Philip J.S. Jones and his indigenous friends are not as voluminous as the Paracas examples, and it is not currently established whether their unconventional shape is a result of ACD or a genetic factor. However, the significance of the find is that they have been found in an entirely new region, with no other extended skulls found anywhere near it previously. This, along with the local folklore, demanded further investigation. 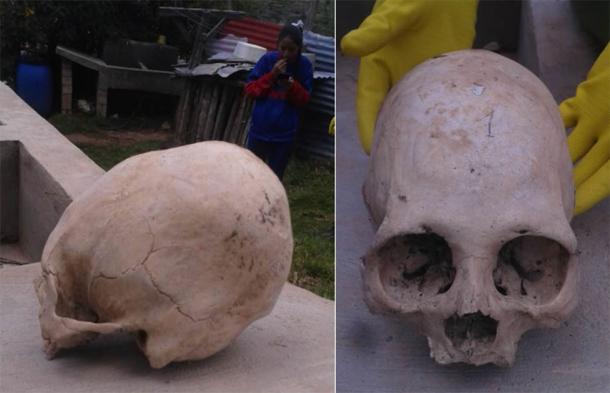 Side and front angle of skulls. (Image: © Philip J.S. Jones)

Well Worth a Call

When I was first approached by Philip J.S. Jones, I administered my usual measure of skepticism. I was intrigued, but in my position working with a successful website I am lucky enough to get a bunch of emails of the ‘discovery’ type each month. They range across the spectrum of possibilities and various levels of excitement. It’s part of the thrill of the role. Each day one learns something new, and each day one ‘discovers’ something previously unknown (even if it was only previously unknown to me).

However, the following kind of email doesn’t drop into one’s inbox everyday:

“At the end of 2018 I found some skeletons with skulls that have extended crania, in a previously undiscovered tomb in the Peruvian Andes at about 3400m above sea level. They are said to come from a long lost civilization, called the “Gentiles” locally. This is an important discovery as these types of skulls were unknown in the area.”

When someone writes to say they have found some elongated skulls, and the clincher – ‘I’ve got pictures’, the adrenaline begins to rise. 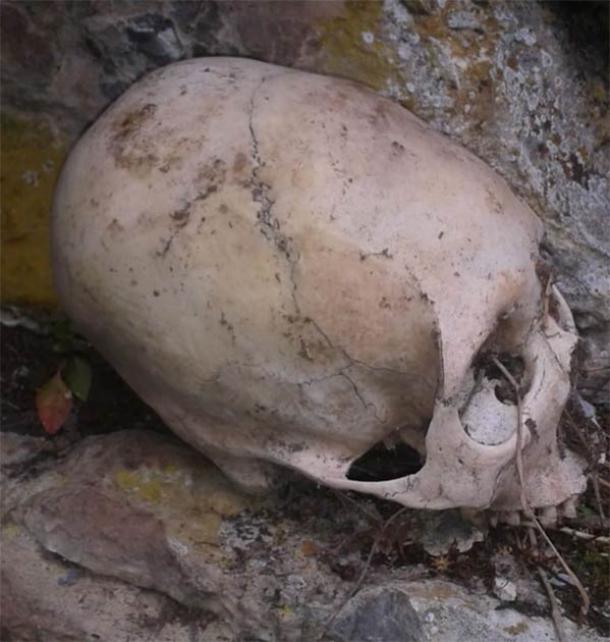 One of two elongated skulls discovered in the mountains in the Cuzco region of Peru, North of Abancay. (Image: © Philip J.S. Jones)

How to ‘Come Across’ Elongated Skulls in Peru

Philip J.S. Jones is someone who could be described as an explorer, or perhaps these days as a ‘seeker’ personality, although he would probably refer to himself as ‘just a normal bloke’. But his exploits stray far from the norm. ‘Normal blokes’ don’t end up high in the Peruvian Andes gallantly defending a local community from incumbent mining companies – and winning. Normal blokes don’t just happen to be in the right place at the right time with the courage, grit, and qualifications to save a community’s homeland. ‘Normal blokes’ take a hike to Machu Picchu and shoot a selfie.

Now, elongated skulls are not a new discovery, and, although they are rare, there are still hundreds of them in various museums around the world. But finding one (or more) is just not the kind of thing that happens every year or even every decade, and for any archaeologist, or even anyone curious about dipping into mankind’s ancient origins, this is likely to be ‘once in a lifetime’ stuff. Eat your heart out Brien Foerster ! 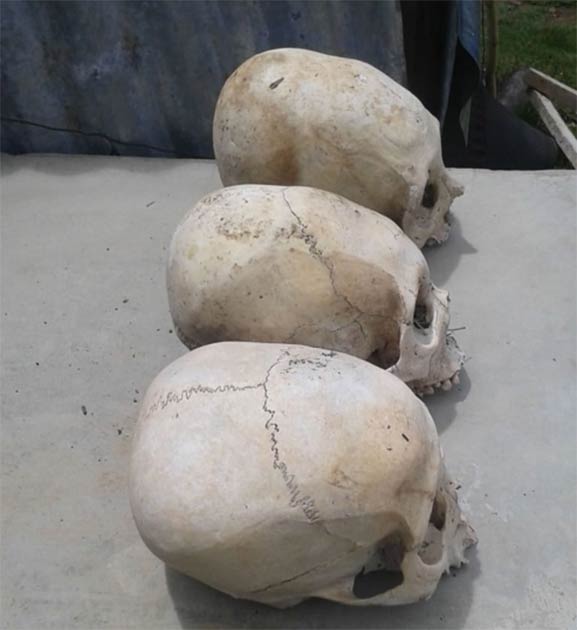 So how did this extraordinary find come about?

In 2008, Philip first visited South America and, as many of us do, he fell in love with the continent and its unusual and intriguing people. And because he ‘could build things’ he found himself off that well-beaten track, building a dormitory in a village in the mountains, a place he would return to almost every year over the next decade.

In 2018, he was making one of his regular visits to his now long-time friends when one of those friends iterated a local folk tale, known as “ Los Tres Foresteros: The Lost Legend of the Chancas ”, which Philip has since put to paper. This tale talks of a lost race of people known as ‘Gentiles’ – a different race who once lived in the region and were “said to be taller than the Chanca tribe” and thriving in the region in the years before the 1530 AD. Legend has it that the Gentiles were banished to live underground by a firestorm sent down upon them by the gods as punishment for their greed.

Although interesting, what brought about the discovery of interest here was the viewing of a documentary a few days later that discussed the Paracas skulls. Speaking of them with his friends, Philip was told there were examples of these to be found in caves in the surrounding mountains, and some had extended mandibles to boot! (Presumably longer than the Habsburgs). 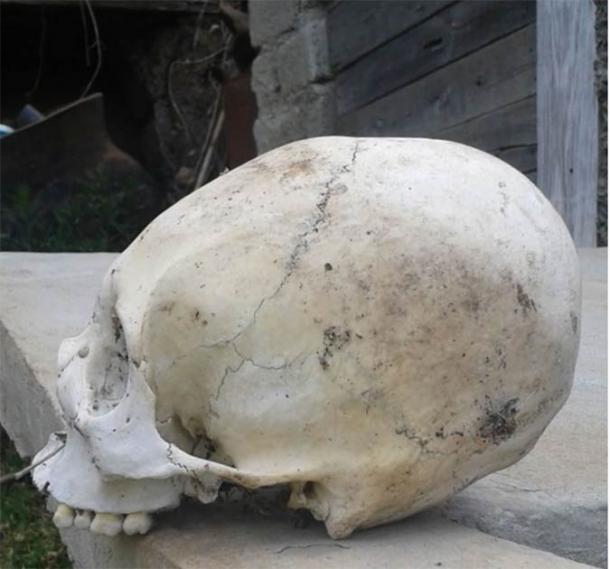 Some of the skulls include teeth, but no mandibles have been recovered. (Image: © Philip J.S. Jones)

Seeking Out the Extended Skulls

Once Philip had heard there were long skulls in those hills, I imagine it was hard to shake them out of his own cranium, which, incidentally, appears to be fairly ordinarily shaped.

And so it was, the small group of Philip, Vilma (his friend), and two wily 15-year-olds called Tania and Wilder, set off from the tiny pueblo near where the skulls were found. After a treacherous hike (as it is dramatically portrayed by Philip in his book, ‘ The Three Foresteros: The Lost Legend of the Chancas’ ), they found what is described as a ‘worked cave’, having some human modification to transform it into somewhat of a tomb (common in the mountain cave tombs found in the Andes). Here they did make a find, but not exactly what they were seeking. Yes, there were some human remains, but there were no skulls attached.

Disappointment is a feeling often associated with exploring, seeking, and archaeology, but the antidote to this can be perseverance, and it was just two weeks later that Philip received word that Wilder had gone on his own quest for skulls and, in a staggering spot of luck (or perhaps the reward for perseverance), had been successful.

Fifteen-year-old Wilder, demonstrating admirably the invaluable contribution of local knowledge in this type of investigation, had come across the skulls that are the subject of this report. They were found in a completely different tomb, somewhere in the mountains nearby. It is highly likely that this tomb was previously known to the local community through the ages, but had been long forgotten. 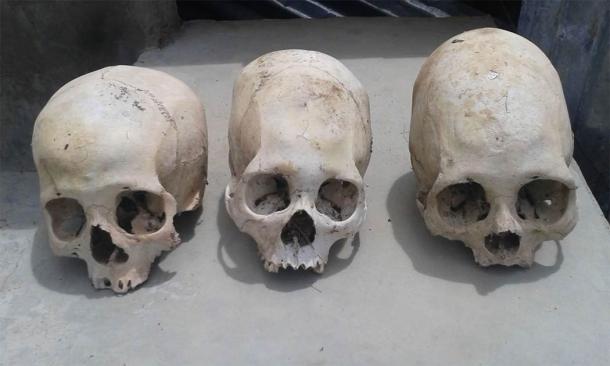 Three of the skulls, including the two extended skulls. (Image: © Philip J.S. Jones)

Ramifications of the Find

So we have the discovery, almost completely by chance, of evidence of extended crania in a new region of Peru, around 100 miles (150 km) north of Abancay. It shows that the tradition of modifying skulls spread wider than was previously known; or that there was a separate race with odd-shaped skulls living in the region – the Gentiles?

To find out the details of this find, such as their antiquity, cranial capacity and origin, the skulls will need to be sent off to laboratories with the appropriate equipment, and this will require a suitable institution to take interest. So, for now, confirmation of the reach of the artificial cranial modification tradition in Peru – or indeed the existence of ‘Gentiles’ – remains in the realms of amateur interpretation, with questions that still abound. For now, the skulls are in the safe hands of the authorities in a remote community high in the Andes in South Central Peru.

You can discover more about how a lawyer from England happens across elongated skulls in Peru, the legend of the Gentiles, and more, in Philip’s books, The Three Foresteros: The Lost Legend of the Chancas’ , and ‘ A Peruvian Diary’ , or even tune in for more of Philip’s fascinating discussions on Strange But True Radio .