A paper by authors Martin B. Sweatman and Dimitrios Tsikritsis, titled ‘Decoding Göbekli Tepe with archaeoastronomy: What does the fox say?’ published in Mediterranean Archaeology and Archaeometry, vol 17, no. 1. (2017) proposed that a key purpose of the Göbekli Tepe site was to serve as an astronomical observatory to monitor comets and their meteor showers, principally of the Taurid system. They maintain the site is sky-centric and that reliefs and symbols on its pillars share vocabulary in recording events connected with the observation of this stream. Pillar 43 of Enclosure D, the cryptic ‘Tauroctony’ of Göbekli Tepe, received focus as a cenotaph remembering the cometary encounter proposed for causing the Younger Dryas event. 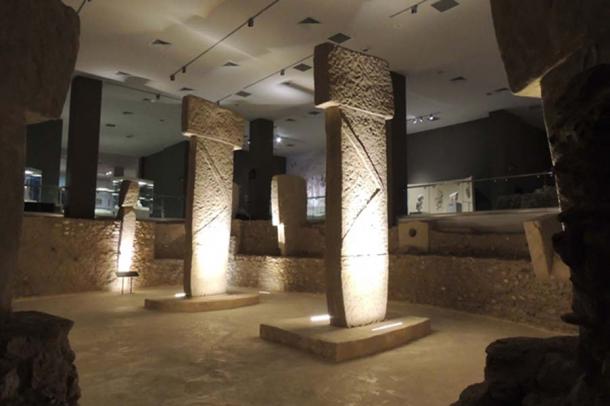 Before Sweatman and Tsikritis published their research, it was not evident they were challenging any pre-existing interpretation that linked the reliefs and symbols to a cohesive pattern of ideology held by the current excavators. However, their statistical case for an astronomical significance of the site clashed with pre-defined notions and specialisms of the excavators whose interpretive orientations prioritize the site as a processer of social complexity and group identity building, following current archaeological trends. These activities explain how the site was used (e.g. food production/feasting) and what reliefs and symbols most likely mean (e.g. social status/clan emblems). Against this, ‘coherent catastrophism’ would fail to gain traction since it restructures these assumptions, together with an unfounded claim that constellation mythologies can only be expected to remain stable over several thousand years, at fundamental levels. The former head of excavation, Klaus Schmidt, was not personally keen on archaeoastronomy but he nevertheless made statements conducive to its interpretation.

For Schmidt, Göbekli Tepe was primarily a sacred site. Its built environment was a nondomestic communal space within a geography of Stone Age pilgrimage, like a Greek amphictyony for hunter-gatherers. Its pillars were non-structural monuments depicting ancestors or supernatural beings. This status of the site as a seasonal, non-residential sanctuary was challenged by Ted Banning, a specialist in domestic and sacred buildings of the Neolithic Levant. Drawing from a resource of ethnographic examples, he demarcates the permeability between sacred buildings and residential living spaces and though he agrees the site had a sacred aspect, Banning believes it was predominately a settlement, that its enclosures were housing units. Absent from the considerations of Schmidt and Banning is the notion of an observatory.

An observatory harmonizes the house-shrine, sanctuary-settlement disparity since, amid other factors, this function of the site would service seasonal gatherings yet accommodate a smaller personnel residence more permanently.

Both Schmidt and Banning compare the humanoid-pillars of Göbekli Tepe to the ancestor statues of Easter Island known as moai. Their comparisons are limited to the logistics of construction/ambulation and their bearing as objects of competitive tribe status. A more qualitative and, one would argue, fundamental dimension of the moai ‘images’, however, was to mediate ancestor spirits at astronomically determined times of the year when the statues would become endowed with life in their ceremonial centers. Not as commonly referenced in Easter Island are its astronomical houses known as tupa. These were mentioned by Katherine Routledge in her The Mystery of Easter Island (1919) and in her unpublished writings. These observatories are built on a north-south or east-west axis and placed at key vantage points over the island. Despite their mundane, observational use for stargazing, these buildings intersect the secular and supernatural as they were entered by crawling through disproportionately narrow entrances to prevent evil spirits gaining access to their spaces. 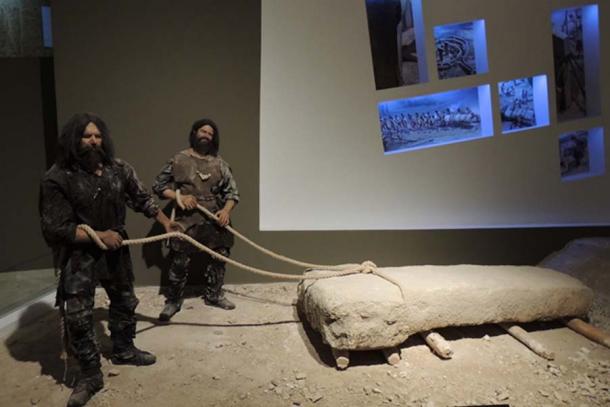 Masons hauling a pillar about the size of the Vulture Stone. Credit: Alistair Coombs

The fact the Göbekli Tepe structures may have been roofed under pole and thatch for small or longer periods does not negate their function as observatories given the site’s hilltop vantage. Moreover, from the perspective of the Upper Paleolithic, which was Schmidt’s ambitioned way of interpreting the site, stellar observations were reproduced in cave art. Building upon the observations of Alexander Marshack and other Paleohistorians on notational artifacts and cave art as astronomic systems, Brian Hayden and Suzanne Villeneuve make a strong case for complex hunter-gatherer groups of the Upper Paleolithic forming secret societies and carrying systems of astronomy and ritual occultism into the Neolithic.  With developed calendar systems, these clandestine hunter-gatherer societies would host feasts and control access to the supernatural through initiation. Emerging from this occult ritual activity at the dawn of civilization, seasonal and other astronomic esoterica would be expected to appear on hunter-gatherer monumental architecture. 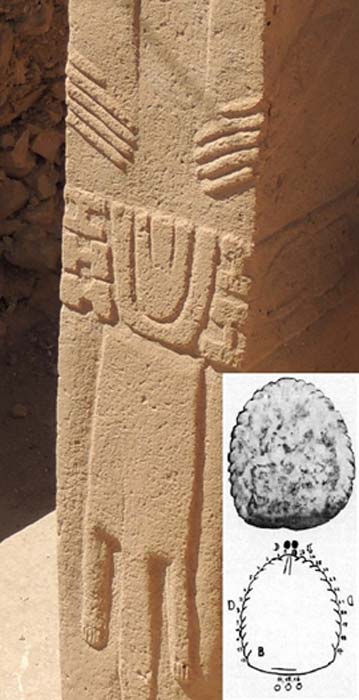 Despite their architectural dissimilarities across time and space, observatories lack any decisive separation between the material and spiritual. As centers hosting a range of cult activity they entwine worldly and cosmic domains. Commonly set within symbolic landscapes as with the solstice-orientated sites of Stonehenge and Hopewell, they merge with the realm of the dead and ancestors were buried in meaningful proximity to them. The sky watching pyramids of Mesoamerica housed tombs and tunnels reflective of death journeys and the roles of astronomer priests were multitasked with magic and the divination of future world ages/destructions in a way the calendar specialists of Göbekli Tepe would schedule initiation, banquets and festivals of the dead upon their secluded highland. The occupation of the site as a sacred observatory to monitor eruptions of celestial activity also unlocks meanings in its iconography.

Hieroglyphs of Nature and the Cosmos

During the first excavation, the reliefs covering pillar 33 caught Schmidt’s attention. Located in Enclosure D, the pillar appears more weathered than others – as if it had been moved and some of its reliefs have been altered, but what they portray is eventful and the pillar is well positioned where it now stands, facing the central T-shape massifs from the south. The pillar’s east-facing side is covered with cranes, or human-crane combinations, duck-like birds, 90-degree H symbols, and a large bundle of snakes. Its opposite side depicts a fox with an equivalent bundle of snakes. The snakes appear to discharge from the fox’s abdomen, as they do with the cranes on the pillar’s other side, making it appear as if the snakes were the progeny of these animals. The snakes turn over the front side of the pillar where their synchronized heads spread over the sides. 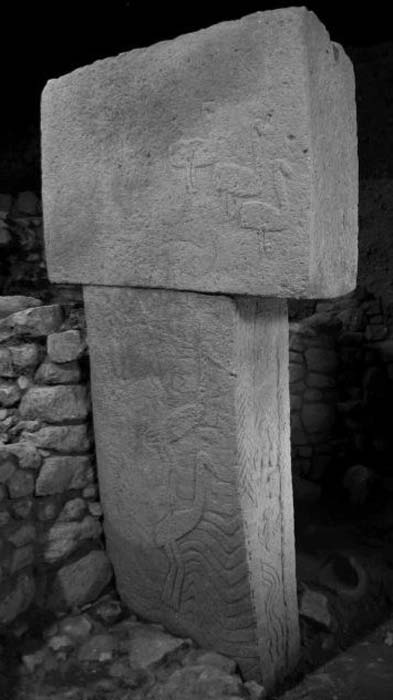 The pillar depict a variety of animals. Mediterranean Archaeology and Archaeometry, Vol 17, No.2 (2017). Credit: Alistair Coombs

The vertical sequence of images found between the snake heads, a combination of realistic animal forms and geometric symbols, struck Schmidt as being possible “hieroglyphs” that would have communicated meaning to an observer, especially to those initiated into the ideology of a secret society. In addition to sacred symbols, he saw them as a storage system of knowledge but did not think they were alphabetic in terms of representing a spoken language. The larger reliefs, which outnumber the smaller symbol groups, he saw as totemistic ideas and different in meaning, but representative of the larger naturalistic imagery from which smaller symbols and pictograms of logographic language are formed. Schmidt believed we lacked the syntax for understanding the message of scenes into which symbols and reliefs are grouped, such as pillars 30, 33, 43, and 18.

Nevertheless, the builders clearly possessed analogical thinking so that the ‘stone age zoo’ is not what it seems – in that a fox, snake, or bull, speak something other than what a fox, snake, or bull communicate realistically. As we are aware, Sweatman and Tsikritis statistically decode the extra subject matter of the figures to the Northern and Southern Taurids. By doing so they propose the carvings are an ordering of the cosmos: the larger reliefs relate to constellations and the smaller reliefs and symbols to periods of the year and astronomical phenomena. Therefore, like instances of Upper Paleolithic cave art, the carvings are not social emblems rooted in the transitory, but relate to concepts of time or images of the world that are time-factored.

Do larger reliefs relate to constellations and smaller reliefs and symbols compare to periods of the year and astronomical phenomena? Credit: Alistair Coombs

The Vulture Stone seemingly presents an obscure, dreamlike vision of ascension between psychological and cosmic realms suggestive of death-in-life initiatory symbolism, when consciousness is sent to another part of the cosmos. Given that the origins of PPN mortuary ritual and its expression in art and architecture is not entirely established, the statistically supported reading of this multi-layered esoteric iconography suggests it speaks a cosmic message larger than the “mortuary ritual” metaphor used to mediate it. In this instance, the death/afterlife experiences of an individual would become meaningless for a group unless they could be reflected in something tangible such as astronomical events involving a zodiac or catastrophe. 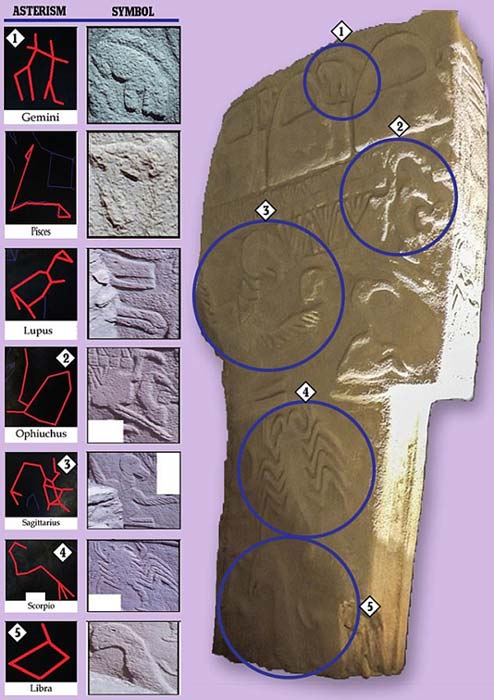 Asterisms and symbols on the Vulture Stone. Credit: Alistair Coombs

At some point post-Younger Dryas, the region of space this death narrative depicts became imbued with deadly connotations, perilous journeys, sorcery, and supernatural attack. Orion was transformed into a constellation after being stung by Scorpius, whereas Gilgamesh was attacked by scorpion-men as the sun rose there. As a constellation-guardian of the hunter-gatherer Barasana secret society, Orion underwent stellafication after he was bitten by a poisonous snake apparently occupying the house of Scorpius.

Rather than describing a state of shamanic ecstasy, Schmidt interpreted the acephal, ithyphallic condition of the man as someone who had died from violence, as the bird-man in the Lascaux shaft-scene had been understood. He also saw the disk as the sun or an egg, so not necessarily connected with the lower scene. Unaware of celestial connotation, Banning proposed the three ‘boxes’ at the top might be Göbekli Tepe houses with corbelled roofs, and the three animals entering them, social/clan emblems. Given the theme of space, death, and necrophagy, however, these dwellings might be better placed as ‘celestial charnel houses’. In support of this reading, the frontside of the pillar shows what Schmidt thought was a Neolithic Kerberos, a hellhound subsequently infamous for ravaging bodies of the dead but also for guarding them. 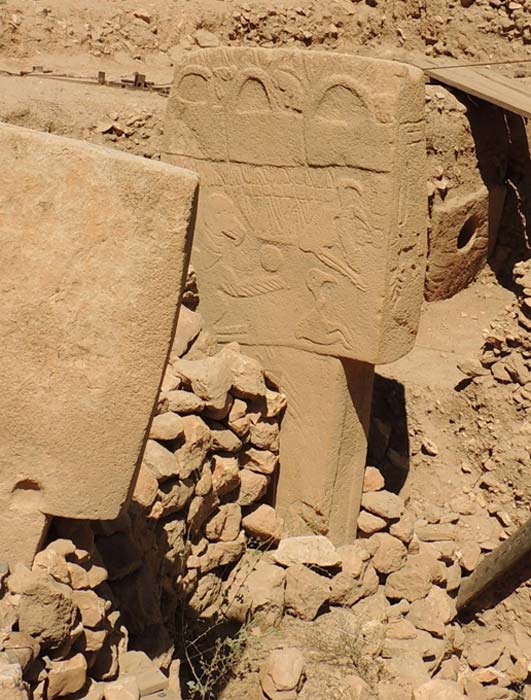 The term domestication borders Göbekli Tepe a lot because there is no evidence of it. Nevertheless, Enclosure D (pillars 43, 33 and the central T-shapes, specifically) bear evidence toward a ‘domestication’ of stars and constellations into a grouping or zodiac. Concepts of a zodiac or an ecliptic system are not evident from Paleolithic times, though it can be demonstrated that specific stars and constellations were storied in a Cosmic Hunt based on their motions, they were not necessarily grouped in the same way. The formation of a zodiacal map, fragments of one we are familiar with today, would have optimized the type of annual sky monitoring proposed by Sweatman and Tsikritis.

While Hayden and Villeneuve provide a model for how astronomical data encoded in esoteric imagery might embed upon monumental hunter-gatherer architecture and indicate ritual calendars, Sweatman and Tsikritis track the creative explosion of such architecture – apparently the first of its kind – against the rapid global climate change of the Younger Dryas for which the site has received attention for being exposed to. They address why the site was built as a matter of human survival rather than how it came to be used. Indeed, with its architectural repurposing, a growing headcount under more temperate climes, the site progressively waned before meeting its symbolic (and physical) termination on a scale which seems opposite to the ‘competition everywhere’ models projected at it.

Berezkin, Yuri, “The Cosmic Hunt: Variants of a Siberian-North American myth.” Archaeology, Ethnology and Anthropology of Eurasia 2, no.22 (2005) 141-50