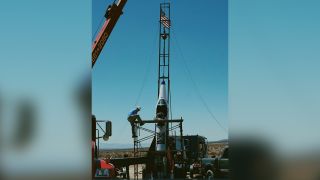 “Mad Mike,” as he called himself, was attempting to reach an altitude of 5,000 feet (1,500 meters) Saturday. He rode his rocket into the sky, but something went wrong and as he rocketed into the air on top of a column of steam, a green parachute seemed to rip off from the rocket, as seen in a video posted to Twitter by freelance journalist Justin Chapman; Hughes then fell to his death, said Darren Shuster, his public relations representative, as reported by the LA Times.

This wasn’t Hughes’ first rodeo, as the self-taught engineer had made two other attempts, the latest of which was supposed to launch in August 2019. That attempt was grounded by bad weather. Before that, the rocketeer had a successful (albeit bumpy) launch in March 2018, when his homemade rocket reached 1,875 feet (572 m) in altitude over Amboy, California. During that launch, Hughes had to deploy two parachutes to save himself from smashing into the desert. Even so he plummeted back to Earth at 350 mph (563 km/h). He got out of that one with just a sore back, he said at the time.

Would flat-Earth-believer Hughes have been able to see our planet’s sphere at 5,000 feet (1,524 m)? Nope. And he knew that, saying he would need to soar past the so-called Kármán line — where the sky ends and space begins, or roughly 62 miles (100 kilometers) above Earth — to see the curvature with his own eyes.

To do that, Hughes  told the Associated Press in 2018 that he wanted to build a “Rockoon,” or rocket/gas-balloon-hybrid. That, he said, would let him float high into the atmosphere before lighting the rocket’s fuse to boost him even farther into the air.

The current attempt, which Hughes had partnered up with Waldo Stakes to carry out, was being documented in a Science Channel series called “Homemade Astronauts.”

“Michael ‘Mad Mike’ Hughes tragically passed away today during an attempt to launch his homemade rocket. Our thoughts & prayers go out to his family & friends during this difficult time. It was always his dream to do this launch & Science Channel was there to chronicle his journey,” the Science Channel tweeted.

ETs ask: Why do humans believe Earth is a spinning ball in space? Earth is actually a Toroid – Emily Windsor Cragg