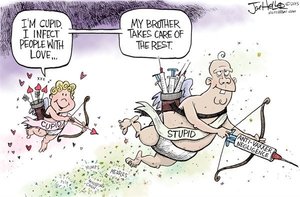 There have been numerous articles in mainstream newspapers and magazines with titles that disparage anyone who questions the safety and effectiveness of vaccines, disagrees (in part or in total) with the U.S. Centers for Disease Control and Prevention’s (CDC) recommended schedule of vaccines, or opposes the idea of forcing people to get vaccinated against their will. You can be a vaccine skeptic, a complete “anti-vaxxer” or someone who simply doesn’t like the government dictating what one should or shouldn’t do with one’s body. It doesn’t matter.

If you choose to reject any part of the current vaccine paradigm, as crafted by the government and the pharmaceutical industry, you will be put on to stupid list, even though, ironically, it is widely acknowledged that people who choose to chart their own way on the issue of vaccines tend to be extremely well-educated and often have advanced degrees.1 2 3 4 5

In 2014, The Huffington Post published an article titled “Anti-Vaxxers Are Stupid and Contagious.”6 That piece was written by the senior editor of The Huffington Post Canada, Joshua Ostroff, so it wasn’t just some random person submitting an article to the publication. That same year, the Los Angeles Times published “Rich, educated and stupid parents are driving the vaccination crisis”7 and the Chicago Tribune published “Anti-vaccine debate proves you can’t fix stupid.”8

In 2015, Australia’s The Daily Telegraph published an article titled “Until they come up with a vaccine for stupidity, anti-vaxxers live on.”9 The newspaper followed up earlier this year with “Just when you thought anti-vaxxers couldn’t get more stupid.”10

These are only a handful of the articles you can find with the word “stupid” or a variation of it in the title. There are countless other articles in the mainstream press with words in the title that convey a similar message. It is unclear what the owners, editors and writers of reputable publications believe they stand to gain from this form of journalism. Common sense might tell you that it’s not such a good a idea to insult a segment of your audience.

Interesting enough, there may be emerging a shift in another direction. Last year, NBC News published an article titled “Don’t Call Them Dumb: Experts on Fighting the Anti-Vaccine Movement.” The piece, written by Maggie Fox, suggested that belittling people with regard to vaccines may, in fact, be helping them attract sympathizers because many people don’t like to see others being abused, and “some of the criticism on cable television, social media and in mainstream newspapers and magazines is starting to look like bullying.”11

More recently, Emma Green’s article in The Atlantic, is titled “Anti-Vaxers Aren’t Stupid.”12 In her piece, Green cites Professor Mark Largent of Michigan State University and author of the book Vaccine: The Debate in Modern America. According to Green, Prof. Largent, who is an associate professor and director of the Science, Technology, Environment, and Public Policy program at MSU,13 notes that 40% of parents in the United States have either refused or delayed a vaccine for one of their children.12

So why is it that so many parents are having doubts about vaccines and vaccination policy? Apparently, it has nothing to do with their level of intellect, but rather the low degree of trust they have in the federal government and the pharmaceutical industry.

… some parents may feel uncertain about vaccines partly because they’re skeptical of pharmaceutical companies, whose profit motives mix with their vaccine-promotion campaigns. And while state governments can mandate immunization, this may end up pushing parents away from the public-school system if they feel that regulations are forcing them to make certain decisions about their children’s health.12

According to Green, Prof. Largent also attributes some of the skepticism toward vaccines on the part of parents to the “monolithic power of science”12—the sense that doctors and medical researchers have an overwhelming amount of power and control over what happens to their children, and that that may make parents uncomfortable to the point where they seek to offset that power and control by doing their own research.

Faced with this imbalance of power and information, who can blame parents for being nervous and striking out on the Internet for a second opinion?12

Still, Prof. Largent’s attempt to explain why so many well-educated people refuse to follow the party line on vaccines does not mean that he believes they are right or even offer some valid points. To the contrary, according to Green, Prof. Largent has said, “Vaccinology has nothing to learn from anti-vaxers.” But Prof. Largent at least appears to be open to “engaging” rather than merely insulting those who hold different views.12 That’s something.

Comment: Author Marco Cáceres wrote another good article about what happens when anyone chooses to reject any part of the current vaccine paradigm: Internet trolls: Anyone resisting the vaccine party line is a target

Increasingly, professionals within a wide range of health care and science fields are giving interviews and writing articles and books voicing their concerns about vaccine risks, the misrepresentation of the historical role of vaccines in reducing mortality from infectious diseases, the expanding schedule and number of vaccines mandated, or even the basic mechanism theories behind vaccine science.

Predictably, every time you give the name of a contrarian doctor or scientist in response to the 99.9% figure, what you tend to get is, “Eh, well, he’s a quack, she’s not credible.” Also, you get referred to blogs such as Science-Based Medicine,1 or Respectful Insolence2, or the Skeptical Raptor’s Blog3. They’re often written by or associated with a guy named David Gorski, MD, who also goes by the alias “Orac.” Gorski is a surgical oncologist and an assistant professor of surgery at Wayne State University School of Medicine in Detroit, MI4.

Should you wish to debunk someone, anyone, who dares to disagree with mainstream thinking on vaccines, all you need do is inform Orac, and the good doctor will gladly oblige by writing up a boorish piece, long on insult and short on science. Orac’s methods are painfully predictable.