Since its debut in 2012, CRISPR gene editing has held the promise of curing most of the over 6,000 known genetic diseases. Now it’s being put to the test.

In the first spate of clinical trials, scientists are using CRISPR/Cas9 to combat cancer and blood disorders in people. In these tests, researchers remove some of a person’s cells, edit the DNA and then inject the cells back in, now hopefully armed to fight disease.

Researchers are also set to see how CRISPR/Cas9 works inside the human body. In an upcoming trial, people with an inherited blindness will have the molecular scissors injected into their eyes.

Those tests, if successful, could spur future trials for Duchenne muscular dystrophy, cystic fibrosis and a wide variety of other genetic diseases, affecting millions of people worldwide.

“CRISPR is so intriguing,” says Laurie Zoloth, a bioethicist at the University of Chicago Divinity School, “and so elegant.”

But big questions remain about whether CRISPR/Cas9 can live up to the hype.

CRISPR’s reputation was tarnished last year after a researcher in China edited a gene in embryos that went on to develop into two baby girls in 2018 (SN: 12/22/18 & 1/5/19, p. 20). The current CRISPR trials don’t have the same ethical challenges — the therapies are being tested in adults and children, and won’t lead to DNA changes that can be inherited, says Alan Regenberg, a bioethicist at Johns Hopkins Berman Institute of Bioethics. Still, he says, there’s reason for caution when working with humans.

Comment: Considering there’s still a lot we don’t know about DNA, how can they be so sure?

CRISPR/Cas9 is a re-engineered virus-hunter, originally developed by bacteria. In 2012 and 2013, scientists described how the system could be tweaked to cut DNA in precise locations, and then demonstrated how it could be deployed in human and animal cells. A piece of RNA — a single-stranded genetic molecule similar to DNA — is the CRISPR part and guides an enzyme called Cas9 to particular spots in the genetic instruction book, or genome. The enzyme slices through both strands of the DNA double helix. Cuts can be used to disable certain genes, snip out troublesome DNA or even repair a problem.

But CRISPR sometimes goes to the wrong spot, resulting in unwanted edits, or “off-target effects” (SN: 9/3/16, p. 22). Even with intended cuts, unwanted errors can arise. “We don’t always fully understand the changes we’re making,” Regenberg says. “Even if we do make the changes we want to make, there’s still question about whether it will do what we want and not do things we don’t want.” 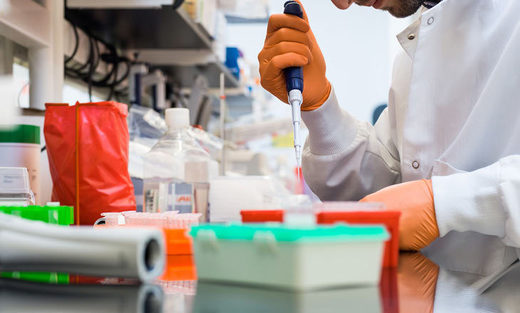 HUMAN EXPERIMENTS Researchers have had success in using the gene editor CRISPR/Cas9 to correct diseases in animals. Now some companies and universities are testing the editor in people. Here, a technician works in a laboratory at Editas Medicine, one of the companies conducting human tests.

Still, CRISPR is more precise than conventional gene therapy and therefore may have the power to treat some diseases for which gene therapy hasn’t worked well, says Conlon, who discussed challenges to gene editing for cystic fibrosis in the June Genes & Diseases. But another big hurdle, he says, is getting CRISPR into the cells where it is needed.

Delivery is less of a problem for the gene-editing therapies in trials to treat cancer and blood disorders, Conlon says. That’s because, for those trials, researchers don’t have to set CRISPR/Cas9 loose in the body. Instead, they take blood-forming stem cells out of participants and edit those cells in lab dishes, where the scientists can check for problems.

University of Pennsylvania researchers have given two people with recurring cancers a CRISPR/Cas9 therapy, a university spokesperson said. One person has multiple myeloma; the other, sarcoma. As part of an ongoing trial, both received T cells, a type of immune cell, programmed with CRISPR to go after cancer cells. Similar trials are under way in China.

Trials are also under way for two blood disorders: sickle-cell disease and beta-thalassemia. Both result from defects in the gene for hemoglobin, the oxygen-carrying protein in red blood cells. The therapy is designed to mimic a fix that nature has already devised, says David Altshuler, chief scientist at Vertex Pharmaceuticals. Usually, a form of hemoglobin that helps fetuses in the womb grab more oxygen from their mother’s blood stops being produced after birth. But some people have a harmless genetic variant that causes fetal hemoglobin to be produced throughout life. “People like that who also inherited a sickle-cell mutation or a beta-thalassemia mutation weren’t sick,” Altshuler says. 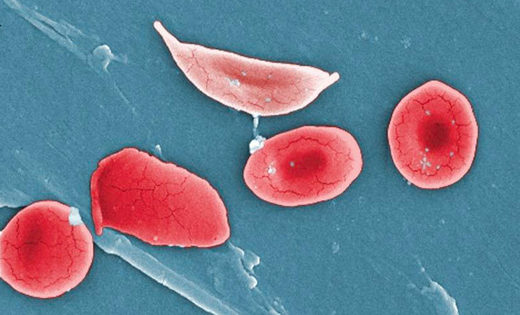 The fetal hemoglobin compensates for the disease-causing defect, something Vertex, a cystic fibrosis drugmaker headquartered in Boston and London, hopes to use to sickle-cell sufferers’ advantage. Vertex and CRISPR Therapeutics, a company in Cambridge, Mass., are testing whether CRISPR/Cas9 cuts can mimic the genetic variant that keeps fetal hemoglobin turned on for life and ease symptoms in people with the blood disorders. “We’re very confident that the edits that are being made in the cells are translating into clear and reproducible increases in fetal hemoglobin,” Altshuler says.

Researchers check for both off-target cuts and mutations at the desired cutting site before giving cells back to the study volunteers via a bone marrow transplant, Altshuler says.

The companies announced in February that they had treated one person for beta-thalassemia. Another person has undergone the same type of therapy for sickle-cell disease, researchers said in July. The scientists have not yet announced results from these trials.

Still, many genetic diseases affect the whole body or organs that can’t be removed and edited in a lab. No one knows whether CRISPR can work well in the human body. But a clinical trial using the gene editor to treat an inherited type of blindness called Leber congenital amaurosis 10 may help answer the question. The disorder is caused by a mutation in the CEP290 gene that leads to a nonfunctional protein. When the protein doesn’t work, rod cells in the retina die and light-gathering photoreceptors can’t renew themselves, resulting in blindness.

RETINA REDO These images show the back of the eye of a person with an inherited form of blindness called Leber congenital amaurosis 10, caused by mutations in the CEP290 gene. The disease can affect people differently. This person has a dark gray area clouding the central region of vision of the retina, called the macula (left). The inner surface of the retina is also subtly wrinkled and marked with dots (right).

There is a gene therapy, approved in 2017 by the U.S. Food and Drug Administration, for a type of Leber congenital amaurosis caused by a mutation in the RPE65 gene. But CEP290 is too big to pack into a virus to do conventional gene therapy, says Charles Albright, chief scientist of Editas Medicine, a company based in Cambridge, Mass., that develops CRISPR gene editing for various genetic diseases.

In July, Editas and global pharmaceutical company Allergan opened recruitment for a blindness gene-editing trial. In the trial, two guide RNAs will lead Cas9 to make two cuts that will snip out the troublesome piece of DNA.

The first people to get the experimental therapy will be adults who are nearly blind, Albright says. Small amounts of the CRISPR editor will be injected under the retina to test for safety. It’s uncertain whether the low doses will improve vision. If the doses prove safe, later volunteers will get higher doses. The researchers may also test the therapy in children.

“We’re going into arguably the most difficult patients to start with and we’re going to improve from there,” Albright says.

Editing as few as 10 percent of retinal cells may help restore some sight, he says. In animal tests, CRISPR edited up to about 60 percent of cells in mice and almost 28 percent in monkeys, scientists reported in the February Nature Medicine.

Even if these first trials don’t pan out as hoped, CRISPR won’t be shelved, Albright thinks. “This is a technology that’s here to stay,” he says. “If this doesn’t work, it’s going to be more about the underlying biology or our ability to deliver the editing machinery.”

There’s precedence that perseverance — and choosing the right disease to target — can eventually pay off. After setbacks, conventional gene therapy has recently had a big success.

In May, the FDA approved a gene therapy for children with spinal muscular atrophy, a debilitating and deadly genetic disease caused by a mutation that disables the SMN1 gene. That gene is needed for specialized nerve cells called motor neurons to survive and function properly. Children with the genetic disease often die because the muscles that control breathing fail. The FDA said August 6 that it had been alerted to problems with data manipulation from animal testing of the therapy. But the agency says that the therapy is working well in humans and should stay on the market.

“These kids with SMA who otherwise would have died are up and running and talking and learning and progressing,” Conlon says. “It is just mind-blowing.”

When it comes to gene editing, researchers are banking on similar happy endings. “People are so optimistic and so hopeful again,” Zoloth says. “I want it to work. Everyone who thinks seriously about human suffering should really be wanting this to happen and should be optimistic … about medicine’s capacity and its power.”

Walter Reed Hospital Active Shooter Turns Out To Be A TRAINING DRILL! – MoxNews

Mandatory Fitness Passports – or be banned from society

Crop Circles – Messages from Another World?

The Soul in the Sea: Re-Uniting with the Dolphins

‘Editors out for blood’: BBC on the hunt for Moscow link to Yellow Vest protests

Galati charges forward in the lawsuit against the Bank of Canada

ISON UPDATE 8 Objects Inside the Coma by BPEarthWatch

Why I Completely Changed My Family’s Long-Term Survival Plan

🇪🇨Ecuador Just Received a $4 Billion Bailout From the IMF…Coincidence? – The Money GPS

Joke’s on YOU, Federal CARBON TAX Takes Effect TODAY in Canada! What You NEED To Know – PFT

5 Ways Benevolent Extraterrestrials Could Save Our Civilization

Where Sumerian Rulers Lie: The Royal Tombs of Ur