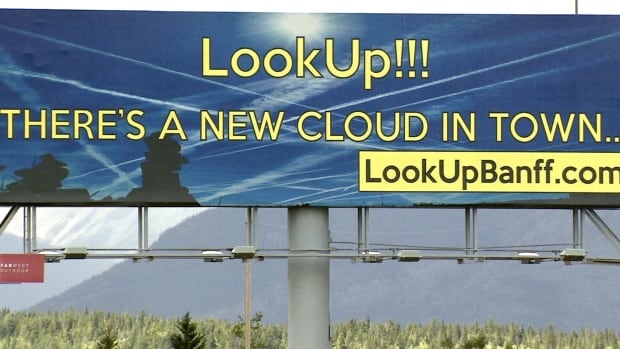 A billboard promoting the ‘chemtrails’ conspiracy theory stands on the north side of the Trans-Canada Highway between Calgary and Canmore. (Kyle Bakx/CBC)

Drive west from Calgary on the Trans-Canada Highway toward the Rocky Mountains, and you’ll pass a distinct billboard that isn’t promoting a hotel, restaurant or other attraction.

Its message is vague, with images of airplane vapour trails crisscrossing the sky and the words “Look up!!! There’s a new cloud in town…” as well as an accompanying website address, pointing people to LookUpBanff.com.

While this might confuse most people, the motive for the sign is all too clear to world-renowned climate researcher David Keith.

‘I think it’s stunning and a frightening thing because it is complete lunacy.’ — David Keith, Harvard scientist

The Harvard scientist was amazed and, admittedly, a little frightened when he saw the billboard, which stands on the north side of the highway between Calgary and the mountain town of Canmore.

The billboard promotes a conspiracy theory about governments secretly spraying chemicals from the sky to sterilize people. While it sounds outlandish, Keith has received aggressive threats from some who believe the theory because his research revolves around finding ways to alter the atmosphere to limit the effects of climate change.

“I get emails once every few days,” he said. “I get occasional mails that are really wild hate mail. I’ve had packages that I’m a little worried to open.”

He also receives disturbing phone calls, and twice the threats were serious enough that the police were called.

Keith lives part time in nearby Canmore, Alta., and says it feels like the billboard is in his backyard.

The slender clouds left behind by aircraft are condensation trails, known as contrails for short. They are created when moisture from a plane’s engines enters the cold atmosphere, similarly to how exhaled breath in winter leaves a visible trail.

The chemtrails conspiracy theory is based on the belief that those trails really are chemicals or other harmful materials that governments are deliberately spraying.

“The fact of the matter is, in our society, a lot of people just believe things that normal science doesn’t believe at all. People believe vaccines are somehow hugely destructive, when the evidence is the other way.”

Keith is a prime target because part of his research focuses on solar geoengineering, which is an attempt to limit the impacts of climate change through methods such as seeding the atmosphere with reflective particles.

While there is significant debate about geoengineering, the mainstream environmental community supports such research. Environmental groups have also strongly rejected the notion of chemtrails. 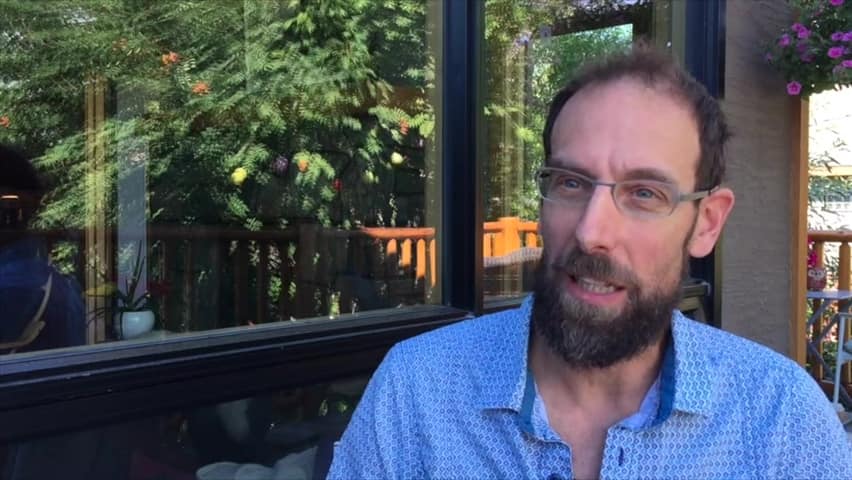 David Keith: Why am I pretty confident chemtrails don’t exist2:27

“I’m a scientist, so I look at credible science — and there is none for the existence of chemtrails,” wrote scientist and environmentalist David Suzuki in a blog co-authored by Ian Hanington with the David Suzuki Foundation.

“The science is clear: human-caused climate change is the most pressing threat to humanity, and we must work to resolve it. We don’t have time for debunked conspiracy theories.”

For Keith, the notion of chemtrails is completely fabricated, as his research team lays out clearly on its website. But he is concerned the belief in chemtrails will alter the public debate about geoengineering.

‘A lot of people just believe things that normal science doesn’t believe at all.’ — David Keith

“Intellectually, I know it’s part of my job now to think and know about this. There’s a lot of people who take this seriously,” said Keith.

“We’ve done some large-scale public opinion polling in Canada and the U.S., and if you ask a very open-ended question, ‘Do you think the government is involved in some kind of secretive program to do spraying?’ you get 10 or, depending how you ask the question, maybe as many as 20 per cent of the people will answer yes to some version of that.”

“I think it’s stunning and a frightening thing because it is complete lunacy.”

Billboards similar to to the one in Alberta have appeared in Oregon and Nevada. The Banff businessman believed to have put up the billboard and created the associated website did not respond to requests for comment from CBC News.

Receiving so many threats from chemtrail believers has made Keith cautious.

“There are some very angry people out there. I don’t wake up worrying about it, but I do think there is some risk of actual violence.”