“A  famous American family” made its fortune from the Nazis, according to John Loftus’ documented historical analysis.

The Bush family links to Nazi Germany’s war economy were first brought to light at the Nuremberg trials in the testimony of Nazi Germany’s steel magnate Fritz Thyssen. Thyssen was a partner of George W. Bush’s grandfather Prescott Bush:

From 1945 until 1949 in Nuremberg, one of the lengthiest and, it now appears, most futile interrogations of a Nazi war crimes suspect began in the American Zone of Occupied Germany.

… What the Allied investigators never understood was that they were not asking Thyssen the right question. Thyssen did not need any foreign bank accounts because his family secretly owned an entire chain of banks.

He did not have to transfer his Nazi assets at the end of World War II, all he had to do was transfer the ownership documents – stocks, bonds, deeds and trusts–from his bank in Berlin through his bank in Holland to his American friends in New York City: Prescott Bush and Herbert Walker [father in law of Prescott Bush]. Thyssen’s partners in crime were the father and [grandfather] of a future President of the United States [George Herbert Walker Bush]. (John Loftus, How the Bush family made its fortune from the Nazis: The Dutch Connection, Global Research, February 2002, edit by GR)

The American public is not aware of the links of the Bush family to Nazi Germany because the historical record has been carefully withheld by the mainstream media.

In September 2004, however, The Guardian revealed that:

George Bush’s grandfather, the late US senator Prescott Bush, was a director and shareholder of companies that profited from their involvement with the financial backers of Nazi Germany.

The Guardian has obtained confirmation from newly discovered files in the US National Archives that a firm of which Prescott Bush was a director was involved with the financial architects of Nazism.

His business dealings, which continued until his company’s assets were seized in 1942 under the Trading with the Enemy Act, has led more than 60 years later to a civil action for damages being brought in Germany against the Bush family by two former slave labourers at Auschwitz and to a hum of pre-election controversy.

The evidence has also prompted one former US Nazi war crimes prosecutor to argue that the late senator’s action should have been grounds for prosecution for giving aid and comfort to the enemy. ( Ben Aris and Duncan Campbell, How the Bush’s Grandfather Helped Hitlers Rise to Power,   Guardian, September 25, 2004)

The more fundamental question is not whether Prescott Bush helped Adolph Hitler (image below). From a historical perspective, what is important is how the rise to power of Adolph Hitler was supportive of  US business interests in Germany.

The Guardian article was published on September 25, 2004 at the height of the US election campaign which led to the reelection of George W. Bush and Dick Cheney on Tuesday November 2nd 2004.

Deafening silence. The US media provided no coverage of GWB’s family history. Had the American people known that the Bush family had links to Nazi Germany, John Kerry would have won the presidency in 2004 in a landslide.

Similarly, Michael Dukakis would have won the presidency in 1989 against George Herbert Walker Bush. In fact, had this been revealed to the American people in the wake of the Nuremberg trials (1945-1949), Bush Senior would never have entered politics and his father Prescott Bush would never have become Senator.

Is there a pattern?  Do you have to be a wealthy war criminal to accede to high office?

What must be ensured  to protect American democracy is that none of these “awkward truths” which reveal the crimes committed by prominent politicians be the object of media coverage. Needless to say, propaganda is essential to uphold the legitimacy of presidential candidates in the eyes of public opinion.

Nazi war crimes with the complicity of Wall Street and the Bush family?

What was the role of the late senator Prescott Bush in his dealings with Nazi Germany:

While the president’s [George W. Bush]  father had dealings with the bin Ladens, his grandfather [Prescott Bush] made a considerable share of the family fortune through his dealings with Nazi Germany. Some have suggested that the Bushes’ assets have their ultimate source, in part, in the exploitation of slave labor at Auschwitz itself.

Loftus argues that this money—a substantial sum at that time—included direct profit from the slave labor of those who died at Auschwitz.

In an interview with journalist Toby Rogers, the former prosecutor said:

“It is bad enough that the Bush family helped raise the money for Thyssen to give Hitler his start in the 1920s, but giving aid and comfort to the enemy in time of war is treason. The Bush bank helped the Thyssens make the Nazi steel that killed Allied solders. As bad as financing the Nazi war machine may seem, aiding and abetting the Holocaust was worse. Thyssen’s coal mines used Jewish slaves as if they were disposable chemicals. There are six million skeletons in the Thyssen family closet, and a myriad of criminal and historical questions to be answered about the Bush family’s complicity.” (emphasis added)

Prescott Bush was by no means unique, though his financial connections with the Third Reich were perhaps more intimate than most. Henry Ford was an avowed admirer of Hitler, and together GM and Ford played the predominant role in producing the military trucks that carried German troops across Europe. After the war, both auto companies demanded and received reparations for damage to their German plants caused by allied bombing. (Bill Venn, A presidential visit to Auschwitz, The Holocaust and the Bush family fortune, WSWS.org,  5 June 2003)

Yes, Queen Elizabeth Saluted the Nazis, But there’s A LOT More to the Story

After 60 years of inattention and even denial by the U.S. media, newly-uncovered government documents in The National Archives and Library of Congress reveal that Prescott Bush, the grandfather of President George W. Bush, served as a business partner of and U.S. banking operative for the financial architect of the Nazi war machine from 1926 until 1942, when Congress took aggressive action against Bush and his “enemy national” partners.

The documents also show that Bush and his colleagues, according to reports from the U.S. Department of the Treasury, tried to conceal their financial alliance with German industrialist Fritz Thyssen, a steel and coal baron who, beginning in the mid-1920s, personally funded Adolf Hitler’s rise to power by the subversion of democratic principle and German law. Furthermore, the declassified records demonstrate that Bush and his associates, who included E. Roland Harriman, younger brother of American icon W. Averell Harriman, and George Herbert Walker, President Bush’s maternal great-grandfather, continued their dealings with the German industrial tycoon for nearly a year after the U.S. entered the war.

While Prescott Bush’s “company’s assets were seized in 1942 under the Trading with the Enemy Act, George W. Bush’s grandfather was never prosecuted for his business dealings with  Nazi Germany. 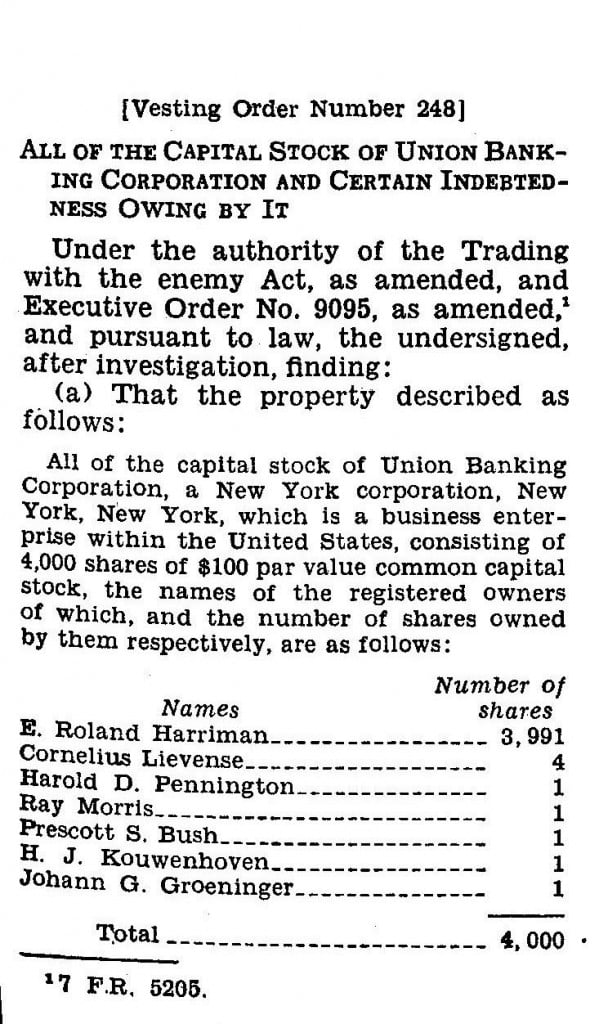 “In 1952, Prescott Bush was elected to the U.S. Senate, with no press accounts about his well-concealed Nazi past. There is no record of any U.S. press coverage of the Bush-Nazi connection during any political campaigns conducted by George Herbert Walker Bush, Jeb Bush, or George W. Bush, with the exception of a brief mention in an unrelated story in the Sarasota Herald Tribune in November 2000 and a brief but inaccurate account in The Boston Globe in 2001.” (John Buchanan, op. cit)

Up until Pearl Harbor (December 1941), Wall Street was trading with the enemy. In the wake of Pearl Harbor, Standard Oil continued to sell oil to Nazi Germany through the intermediation of so-called “neutral countries” including Venezuela and Argentina.

God, please save me from your followers!