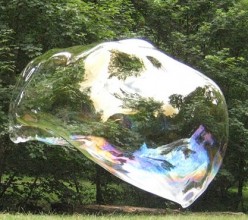 Over the years I’ve heard the cries of “Economic Collapse Ahead!” more times then I care to remember. I’m sure you have as well. Ever since the crash of 2007-2008, it seems like nearly every internet voice has claimed at one time or another, that we are headed for an apocalyptic market correction (and just around the corner too!). This of course, is not without merit.

You’d be a fool to think that we’re on a sustainable course. It has come down to a matter of simple arithmetic. From federal and municipal debt, to stock market and housing speculation; from personal credit to student loan debt, we’re in heaps of trouble. We can project how much society as a whole will earn in the future, deduct how much we owe, and how much we will owe, and see that none of this will ever be paid for. At this point there is a 100% probability that the system will crash. The only question left to ask is, when?

And therein lies the problem. Those of us who have been calling it like it is, and speaking of this in terms of inevitability, must look like “chicken little’s” by now. Most people view the world through a very short term window. It’s been six years since the crash of 2008, and the average person will have tuned out the warnings by now. They don’t understand this one fundamental rule when it comes to predicting economics and geopolitical events-it is shockingly easy to predict the fall of any given system. It’s near impossible to predict when it will fall.

In addition, there is another outcome that many of us have failed to recognize. What if the system doesn’t fail so decisively? What if there isn’t a dramatic collapse like we saw during the Great Depression? While there have been many economic bubbles throughout history, and we are no doubt in a pretty serious bubble as we speak, the nature of this debt cycle is fundamentally different than in past decades.

Recently, strategists for Deutsche Bank released a startling study in regards to government debt. They decided to investigate whether or not the bond market is currently in a bubble. What they found was, unlike previous eras, the past 20 years has seen no lag between economic booms and busts:

It has long been our view that over the last couple of decades the global economy has rolled from bubble to bubble with excesses never fully being allowed to unravel. Instead aggressive policy responses have encouraged them to roll into new bubbles.

This has arguably kept the modern financial system as we know it a going concern. Clearly there have always been bubbles formed through history but has there been a period like the last 20 years where the bursting of one bubble has consistently led directly to the formation of the next?

Essentially, our current system has been dying a very slow death. It’s running out of steam. Not only has there been no recovery since the crash of 2008, there has been no recovery for over 20 years. Each economic bubble has been fueled from the remains of the previous speculative mania. Our whole economy has been running like a drunken frat boy, desperate to keep drinking to put off the inevitable hangover. However, the hangover is frighteningly near:

What we found was that bonds are where the bubble has migrated to. This is not to say that the bond market bubble is about to burst — far from it — but that it is a necessary condition for maintaining the debt ladened financial system that has been the by-product of major crisis management over the last two decades. The worry is that there is nowhere left for this bubble to go given that it is now in the hands of the lenders of last resort (governments and central banks with regulators ensuring other large captive buyers).

Although we think this bubble needs to be maintained to ensure the solvency of the current financial system, the best case scenario is that it slowly pops over time via negative real returns for bondholders. The worst case scenario being future restructuring.

This is why for all these years, we’ve heard the cries of “economic collapse ahead” but have never seen it come to fruition. They’ve always figured out a way to shift the bubble to different markets before it all came crashing down. Who knows? Maybe they’ll pull it off again, but I’m not holding my breath. The bubble has finally landed on the lender of last resort. The debt has no nowhere else to go.

They’re out of bullets. The frat boy has had his last drink and the county is dry. I know without a shadow of a doubt that our economy, and by extension our whole society is ready to collapse. And it will.

Just don’t ask me when.