Have you ever wondered who ‘us’ and ‘our’ refers to in Genesis 1:26 when it says, ‘And God said, Let us make man in our image, after our likeness’?

Kendra Gilbert and I interviewed theologian, astrotheologist and extraterrestrial researcher Jordan Maxwell on In5D Radio and talked about this subject.

“What is being said that is “somebody”… the “gods”, whoever that is…  they see the indigenous creatures that we call hominid creatures who have been here for thousands of years… and they said, “Come let US…” whoever “us” is… “Let us make man in OUR image, after OUR likeness.  Not make man… he’s already here, but let us make him in OUR image, after OUR likeness.  So then they tampered with the DNA in the indigenous creatures that we call hominids and they create a new kind of creature.  Now we begin to look like our Creators.  We look like the Gods.  They don’t look like us, we look like them because they said, “Come let us make man in our image, after our likeness”.  What’s being said in the bible may be very true… that we look like our Creators.  If that’s the case, then who’s to say that they’re still not here?  You just see them as humans but they’re not human.  They very well could be the Anunnaki, that’s what they look like.  They look like us, they look like humans.  No, actually we look like them and so they could be leading us right now, today and we wouldn’t know it.  We just look at them as our political leaders (and) our religious leaders, never for a moment realizing, “No, they are not human.”  That’s why they can do what they do.  The basis for their power, they say that they have a “Divine Right” of kings.  Well, maybe they do have a “Divine Right”?  They are the Anunnaki.  They are the ones who created you.  You look like them.”

The following is an excerpt from Pentagon Secret – The Anunnaki Are Returning:

In the Sumerian tale, Enki disobeyed his father, Anu, and loved the human creations.  Enki and Anu have been at war ever since this betrayal.  Anu was one of the “creator gods” who manipulated our DNA to make us slave workers who would mine the gold on this planet for the Anunnaki.  This is most likely the reason why the Roman Catholic Church (RCC) is in possession of so much gold.  According to one source, it is estimated that the RCC owns 60,350 metric tonnes of gold.

If you look at the pyramid on the back of the US Dollar, you will see an “all seeing eye”.  Is it possible that the entity (or entities) at the top of the pyramid are the Anunnaki and have kept us as economic slaves for thousands of years?

They all came from the same bloodlines.

One must also ask themselves about the importance of why these specific bloodlines needed to stay within their own circle as well as how they all have kept humanity suppressed while they build wealth.

Why is there so much ethnic diversity on our planet?

If the Anunnaki created one slave race, then why is there so much ethnic diversity on our planet?

One answer may be found with this excerpt from Starseeds and Our Human Origins:

Zecharia Sitchin believes our DNA was genetically manipulated, which remains a possibility, but why would the Annunaki create various ethnicities instead of one slave race?

That leads us to another, more feasible, possibility.  We were seeded here from various star nations.  In this premise, genetic and ethnic diversity is explained.  It also covers the differences in our blood types, such as Rh negative, Rh positive, A, B, AB and O blood types.  Perhaps some star nations have people with predominantly red hair and freckles while others have dark skinned inhabitants?  Maybe some, such as the Pleiadians, have blonde hair and blue eyes?

It’s also possible that Sitchin’s premise is correct, while other star nations ALSO seeded the planet with their genetic offspring.

As it turns out, we are ALL economic slaves in this current system of subservience, control and conformity. Is this the way it’s supposed to be?

It seems that many unawakened people are basically content being economic slaves to a system of tyranny and oppression and will not even question why they need to “work”.  Because everyone else either has a job or is looking for one, they think that this is the way it should be. 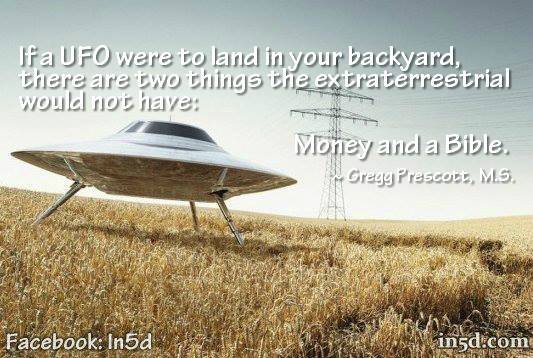 If a UFO were to land in your backyard, there are 2 things the extraterrestrial would not have: Money and a Bible.
~ Gregg Prescott, M.S.

One question I often ask people is this:  “If a UFO were to land in your backyard, do you think the extraterrestrial would have money or a bible?”  I seriously doubt it.  Why?  Because most advanced civilizations have moved beyond religion and economic subservience.

Excerpt from Pentagon Secret – The Anunnaki Are Returning:

The King James version of the Bible was edited by Sir Francis Bacon, who was a 33rd degree Freemason.  At this level of freemasonry, there is a motto of “ordo ab chao” which means “order out of chaos”.  The bible ends in chaos with the chapter called Revelation.

Gregg Prescott, M.S. is the founder and editor of In5D and BodyMindSoulSpirit. You can find his In5D Radio shows on the In5D Youtube channel. He is also a transformational speaker and promotes spiritual, metaphysical and esoteric conferences in the United States through In5dEvents. His love and faith for humanity motivates him to work in humanity’s best interests 12-15+ hours a day, 365 days a year. Please like and follow In5D on Facebook as well as BodyMindSoulSpirit on Facebook!