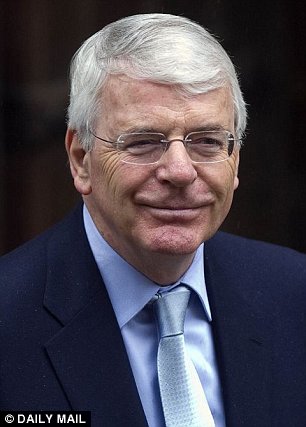 Tony Blair is hiding behind Government protocols to keep the notes between himself and George Bush secret, the former Prime Minister John Major suggested this morning.

Sir John warned that the decision not to allow the Chilcot Inquiry to publish the full correspondence between the two leaders in the run-up to the Iraq War would would allow conspiracy theories to ‘fester’.

He said it was a ‘pity’ that only the ‘gist’ of the notes and conversations would be published – and urged Mr Blair to publicly call for the details to be published in full.

Sir John said only Mr Blair and the last Labour Government could overrule the civil service rules stopping the notes from being published.

He said: ‘I think it is a pity the papers are going to be withheld for several reasons. Firstly, they will leave suspicions unresolved and those suspicions will fester and maybe worsen.

‘And secondly, in many ways I think withholding them is going to be very embarrassing for Mr Blair, not least of course because he brought in the Freedom of Information Act into law when he was in government. But that is the decision that has been reached, effectively by the Cabinet Office.’

He added: ‘I suppose the previous Labour government could approach them and say “we’d like to over-rule this, we think it better if they release those papers”, but the Government can’t do that.

‘Let me make that point – the Government cannot do that, Mr Blair could. The previous Labour Government could – and maybe in their own interests they could think about that because, otherwise as I say, this will fester and I don’t think anybody wishes to see that.’

Sir John’s intervention, on BBC Radio 4 this morning, will pile pressure on Mr Blair to publicly ask for the notes to be published.

It comes after the Iraq inquiry was condemned as a whitewash over the deal to keep the notes secret.

Cabinet Secretary Sir Jeremy Heywood has vetoed the release of the letters and phone calls in the run-up to the 2003 conflict, officials revealed.

In them, Mr Blair is said to have promised the US President: ‘You know, George, whatever you decide to do, I’m with you.’ 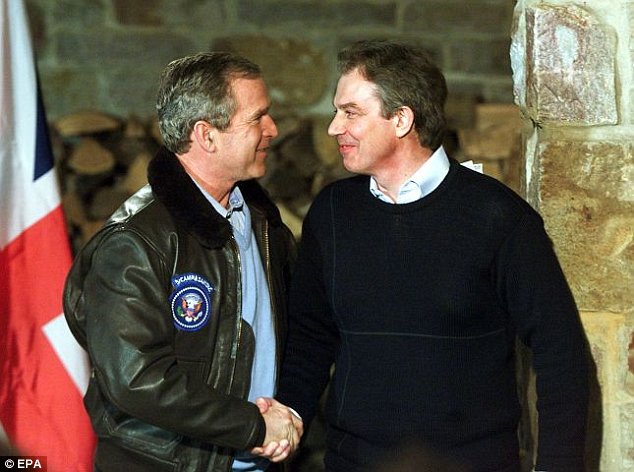 Secrets: The hold up in the publication of the Chilcot report is down to a disagreement over what can be published from the notes and conversations between George Bush and Tony Blair in the run up to the war

The decision raises the possibility that the long-delayed findings of the £10million inquiry will be published before the general election.

The official reason for the censorship is that publication would deter prime ministers from speaking freely in private.

But critics said it was a shabby compromise that could fatally undermine public confidence in the findings.

Families of some of the 179 British soldiers killed in the conflict 11 years ago said last night they felt betrayed by the decision. 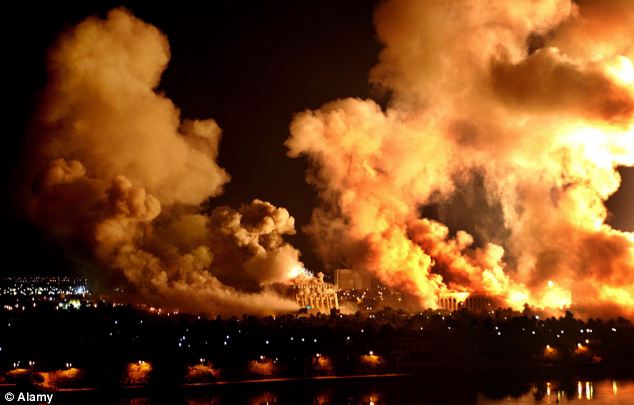 Baghdad ablaze during the allied bombing on the first night of the Shock and Awe operation, Iraq War, March 2003 B4M1E8

June 15, 2009: Premier Gordon Brown announces inquiry led by Sir John Chilcot ‘to consider the period from the summer of 2001 to the end of July 2009, embracing the run-up to the conflict in Iraq, the military action and its aftermath.’

January 29, 2010: Tony Blair gives evidence. Says he has no regrets about removing Saddam. Booed as he leaves.

November 16, 2011: Report’s release put back until at least the summer of 2012 following a dispute with the Cabinet Office over the use of classified documents, including Blair’s private messages to George W Bush in the run-up to the war.

July 16, 2012: Sir John says the report will not be published before the middle of 2013 because no decision had been reached on which documents should be released.

November 7, 2013: Sir John suggests publication could be delayed indefinitely by row over over 130 new transcripts of conversations between Brown, Blair and Bush.

May 16, 2014: David Cameron says he hopes for publication by end of the year.

May 27, 2014: Blair insists he is not the reason for the hold-up, saying he wants to hear the findings so he can defend himself.

May 29, 2014: Deal reached for extracts of exchanges between Blair and Bush to be published – but full texts will remain secret.

They believe the letters would reveal the real reason why Mr Blair dragged Britain into the catastrophic war to topple Saddam Hussein.

Rose Gentle, who lost her son Gordon, 19, said she felt let down. ‘I don’t think we’ll get the truth now,’ she said. ‘As far as we are concerned Tony Blair is just walking away from this.’

Reg Keys, who last year announced he would sue the Ministry of Defence for negligence after his son Lance Corporal Tom Keys was killed at the age of 21 in 2003, said on BBC2’s Newsnight programme last night: ‘I need to draw a line under this and until I know the whole truth I can’t. It will be an open wound until the day I die.’

The move follows two and a half years of wrangling between the Iraq inquiry and Whitehall officials over the publication of 25 letters sent by Mr Blair to President Bush and the transcripts of 130 phone calls between the two men.

In a letter yesterday, inquiry chairman Sir John Chilcot confirmed his long-awaited report would publish only ‘the gist’ of Mr Blair’s messages to Mr Bush.

The US president’s replies will not be published in any form.

Mr Blair was consulted over what to make public as were the US authorities, who objected to the release of confidential conversations involving the former president.

The deal stands in stark contrast to other major inquiries, including the recent phone-hacking inquiry, when private messages were subject to the full glare of public scrutiny.

Government sources last night defended the decision, saying that releasing the Blair/Bush messages would limit the ability of future prime ministers to speak freely with world leaders for fear of their discussions being made public.

One source close to the talks said the US government had also blocked any hope of full publication.

‘It’s as simple as the Americans saying no,’ the source said.

Former Liberal Democrat leader Sir Menzies Campbell called the decision an ‘unsatisfactory compromise’, and warned that the deal on what can be published could be ‘subject to a whole variety of interpretations’ by the civil service.

Mr MacKinlay, a member of the Common foreign affairs committee at the time of the war, said: ‘I am not surprised that Chilcot has surrendered. It is a bad, bad day for democracy and justice.

‘The Establishment of this country and the security and intelligence services have won again. Truth has lost out. We were lied to as a country time and time again on Iraq. The lies endure.’

Labour MP John McDonnell said: ‘This confirms all the suspicions people had that the inquiry will be a whitewash. Unless there’s full and open transparency the credibility of this inquiry will be completely undermined.’ 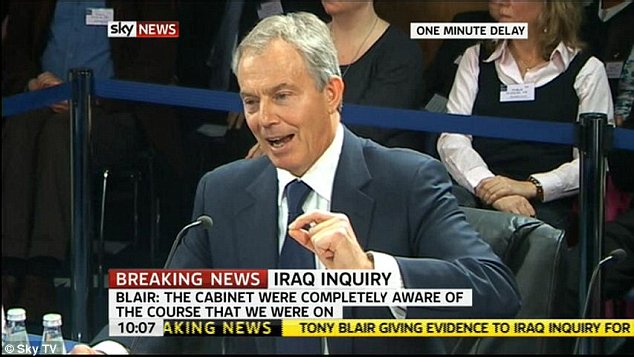 Questions: Blair faced hostile questioning at the Chilcot inquiry in January 2011 over his role in Britain’s war