Tens of thousands of people remained stranded on Thursday evening while attempting to flee bushfire-ravaged areas of the south-east Australian coast – having earlier been urged to leave before the return of extreme and dangerous weather conditions.

The mass evacuation of communities in New South Wales and Victoria is among the largest ever emergency movements of people in Australia. The numbers fleeing the bushfire crisis remain unclear, but are expected to compare to the 60,000 people who were flown out of Darwin after Cyclone Tracy in 1974.

Visitors told to flee a vast evacuation area along the NSW south coast reported sitting in gridlock for up to 10 hours after responding to the order to evacuate, as further outbreaks of fire and sheer weight of traffic blocked escape routes north of Ulladulla and near Cooma in the Snowy Mountains.

The prime minister, Scott Morrison, urged people to be patient, as he again deflected criticism about his government’s policies to address the causes of climate change.

On Thursday afternoon an angry protester told Morrison he should be “ashamed of himself” and that he had “left the country to burn” during a tour of the burnt out town of Cobargo.

Authorities in Victoria hold grave fears for 17 people missing across the state, and advised anyone who could do so to leave fire-affected places in the East Gippsland region.

At the Victorian coastal inlet of Mallacoota, which is among 20 towns that have been isolated by the fires since Tuesday, between 3,000 and 4,000 people were facing an impending food and water shortage as they waited to be evacuated by sea.

On Thursday afternoon, Australian defence force officials said they expected to relocate 800 people using the naval ship HMAS Choules, while others will be airlifted out.

New South Wales has declared a seven-day state of emergency before extreme conditions, including temperatures exceeding 40C, return to the south coast, Snowy Mountains and the outskirts of Sydney on Friday and Saturday.

Evacuation orders were issued to holidaymakers from Batemans Bay to the Victorian border and people were advised that two highway escape routes were opened – north to Sydney along the Princes Highway, and south, via the Monaro Highway, hooking back to Canberra through Cooma. But on Thursday evening both routes were at a standstill as the fire threat lingered, with tailbacks of up to 25km reported. 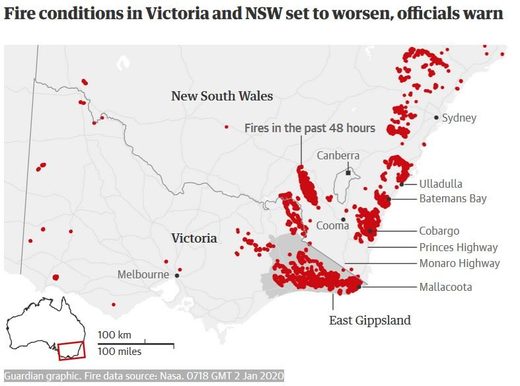 The northern route was blocked from about midday by a bushfire that closed the Princes Highway. Motorists heading north were advised to delay their trip or take shelter at Ulladulla. The road remained closed about 6pm. Motorists were reported abandoning their cars or heading to the south.

The southern route was also hampered by a bushfire that came close to the Monaro Highway and caused delays north of Cooma. Witnesses said the lines of stationary traffic near Cooma were more than 30km long.

Residents in the town of Batlow, famous for its apples, were advised to leave by Friday morning because of forecast fire danger in the Kosciuszko national park and surrounding areas. The entire park has been evacuated and authorities warned conditions were likely to be so severe that surrounding towns could not be defended.

NSW Rural Fire Service commissioner Shane Fitzsimmons said conditions on Saturday were forecast to be worse than those on New Year’s Eve.

“Those fires have spread at the absolute worst-case scenario, which typically is not what happens when it plays out on the ground,” Fitzsimmons said.

“The conditions on Saturday are likely to be worse than New Year’s Eve and a lot of those areas in the south-east quadrant of the state have the potential to be impacted and impacted very heavily.”

The New South Wales premier, Gladys Berejiklian, said the state of emergency from Friday would give emergency services the authority to undertake forced evacuations and road closures at short notice.

“We don’t take these decisions lightly but we also want to make sure we’re taking every single precaution to be prepared for what could be a horrible day on Saturday,” she said.

Since Christmas Day, nine people have been killed in bushfires across New South Wales and Victoria, while 17 people have died since the season began.

About 150 fires continued to burn in Victoria and NSW on Thursday afternoon and officials warned they would be unable to control the blazes before conditions worsen.

“We have no capacity to contain these fires … the fires are going to do what they are going to do, and people have to get out of that area,” NSW Rural Fire Service deputy commissioner Rob Rogers said.

Earlier on Tuesday, Morrison attended the funeral of Geoffrey Keaton, a volunteer firefighter who died on 19 December when his truck rolled at Green Wattle Creek, south of Sydney.

At a press conference afterwards, Morrison was repeatedly asked about his government’s climate policy.

“The drought has created a tinder box around the country and that has, through various forms of ignition, has seen these fires run for long periods of time.”