Pakistan actually shot the man claimed to be bin Laden.

The first fake photo, used by Reuters’ and the British Press. 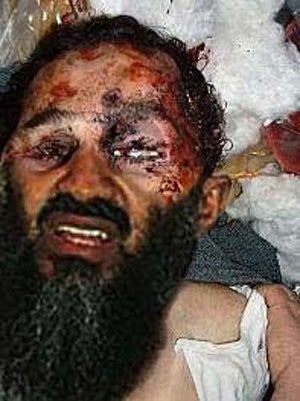 US Senator Scott Brown confirmed that this was the image he was shown as part of an official US government briefing to the Senate Armed Services Committee.

Brown, a member of the Senate Armed Services Committee, suggested he had viewed them as part of an official briefing, and he argued that they were too graphic to be released to the public and could enflame terrorists.Oops.

Brown later acknowledged that he had fallen victim to a hoax, apparently the same doctored images that were making the rounds on the Internet.

And here is how the fake was made! 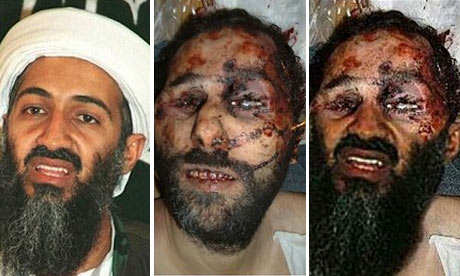 The mouth and beard from a photo of the real Bin Laden in the mid 80s was photoshopped onto the head of another dead man.

“If at first you don’t succeed, lie, lie again!” — Motto of the White House

Another photo that was leaked onto the net following the collapse of the first fake. The White House strategy appears to have been to “test” the fakes with leaks, then go with the first image that appeared to fool everyone. This one did not.

Ignoring the bullet hole this guy looks very healthy for ten years of dialysis. The nose is also too narrow. But the main reason to disregard this as another likely fake is simple. This image is tainted green to make it look like a night vision image, yet the soldier at right is looking off left, apparently able to see just fine without night vision goggles. And finally, there is something missing from this image that should be there (besides night vision goggles). 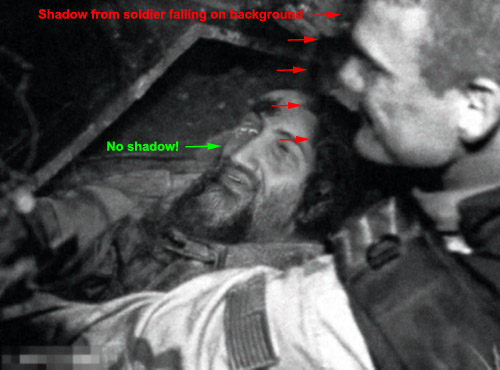 There is an illumination source to the upper right of the camera taking this image. You can see the resulting shadows on the jaw line and cheek of the soldier. More to the point, there is clearly a shadow from the soldier’s face extending left from his face and falling on the floor and the side of “Osama’s” face. Yet there is no trace of a similar shadow from the face of “Osama” above the beard near the right eye. And didn’t the White House say “Osama” was shot above the LEFT eye?

Source image for the second fake is found; a clip from the movie “Blackhawk Down.” 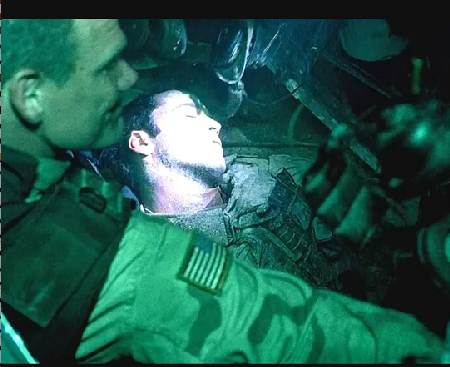 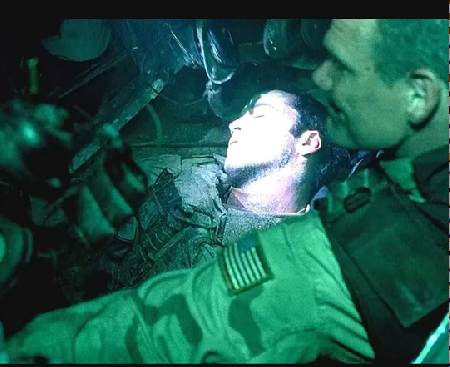 And merged with another fake bin Laden.

The people who want to send your children off to die in wars on Israel’s enemies are nothing if not persistent. After the above Blackhawk Down failed, they tried once more.

This is a simple morph, again exposed when the original source image was located by a WRH reader. 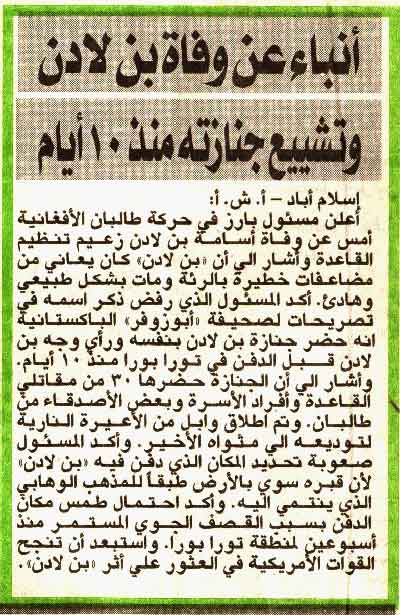 News of Bin Laden’s Death and Funeral 10 days ago Islamabad – A prominent official in the Afghan Taliban movement announced yesterday the death of Osama bin Laden, the chief of Al-Qaeda organization, stating that bin Laden suffered serious complications in the lungs and died a natural and quiet death. The official, who asked to remain anonymous, stated to The Observer of Pakistan that he had himself attended the funeral of bin Laden and saw his face prior to burial in Tora Bora 10 days ago. He mentioned that 30 of Al-Qaeda fighters attended the burial as well as members of his family and some friends from the Taleban. In the farewell ceremony to his final rest guns were fired in the air. The official stated that it is difficult to pinpoint the burial location of bin Laden because according to the Wahhabi tradition no mark is left by the grave. He stressed that it is unlikely that the American forces would ever uncover any traces of bin Laden.

Even Fox News reported Bin Laden was dead in 2001 … until it was decided that a live Bin Laden was more useful to the war hawks than a dead one!

In 2007, shortly before her own assassination, Benazir Bhutton confirmed that Osama Bin Laden was dead. 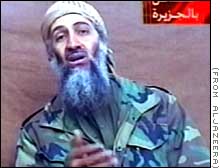 The above is from the last known video of the real Bin Laden, just weeks before his death. Note the indications on his skin of the effects from dialysis.

Every Bin Laden shown on TV since then has been a phony to justify wars, TSA, and the loss of your civil protections. 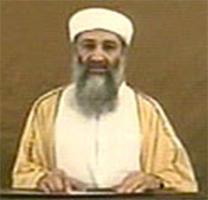 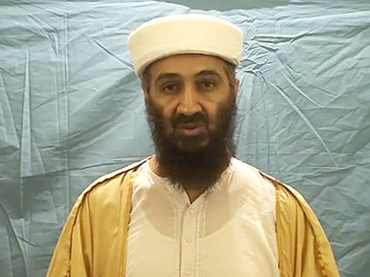 In one notorious case, the FBI simply took the face from a Spanish politician, photoshopped it, and claimed it was Bin Laden. In another case, the CIA openly admitted making fake Bin Laden videos.

Finally, a photo used to support the claim that a 24 (or 29; the story kept changing) year old woman was Bin Laden’s wife, the Daily Mail published the following photo. 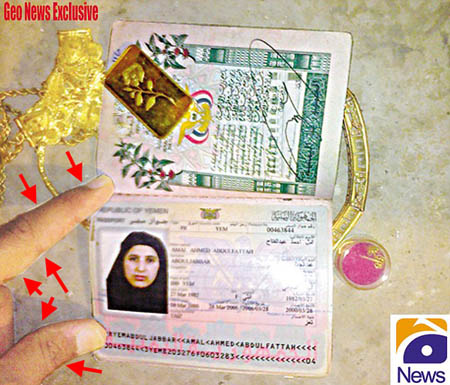 Click for larger image
Take a close look at the fingers in the Daily Mail photo of the passport. This is another photoshop creation and a very clumsy one at that. The face seems to be an overlay as well and not part of the actual image of the passport. 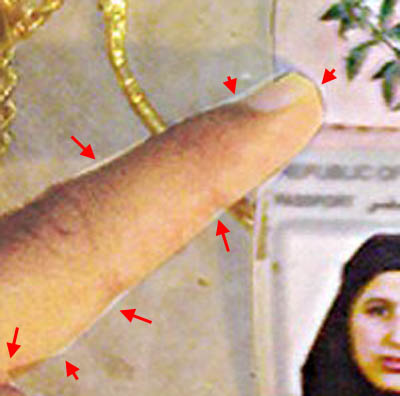 Common sense will tell you that if you have real evidence of a real event, you do not need, nor would you risk, using a fake piece of evidence, because of the fake is exposed, doubt is cast on the real evidence. So, if the US Government is showing phony bin Laden photos to the Senater Armed Services Committee, it means all the evidence must be fake. 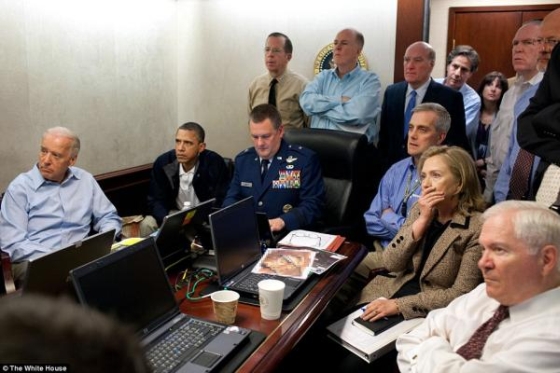 The above photo is supposedly of the White House staff deep in concentration while watching the execution of Bin Laden. But it is a posed and staged shot. Nobody bothered to turn on the laptop computers on the table! 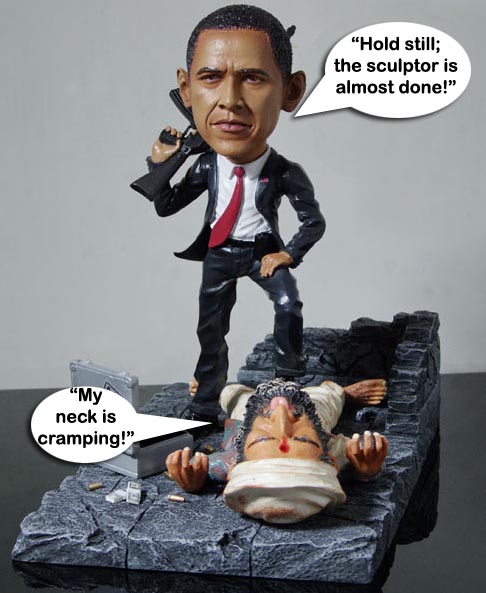 Pathetic attempt by Obama to take credit for ‘getting’ Bin Laden.

Sent in by a reader!

It is known that ears are as unique as fingerprints. NO two are exactly the same and ears are used for identificatrion on photos where fingerprints are not available. 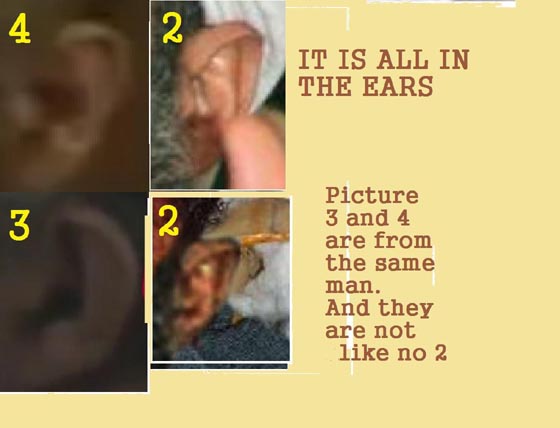 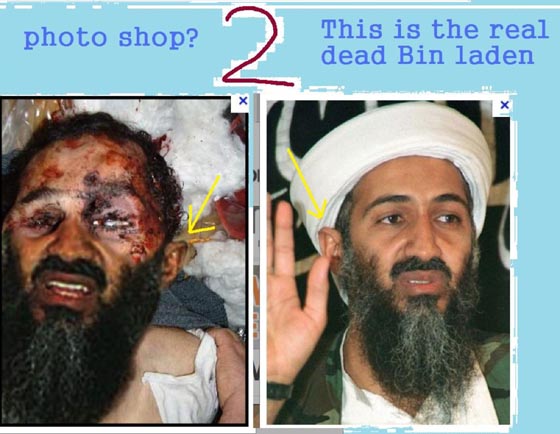 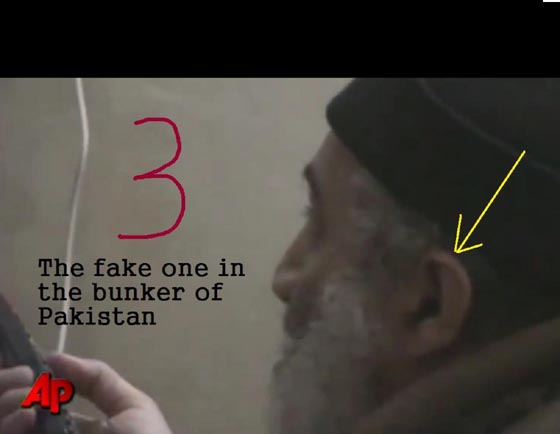 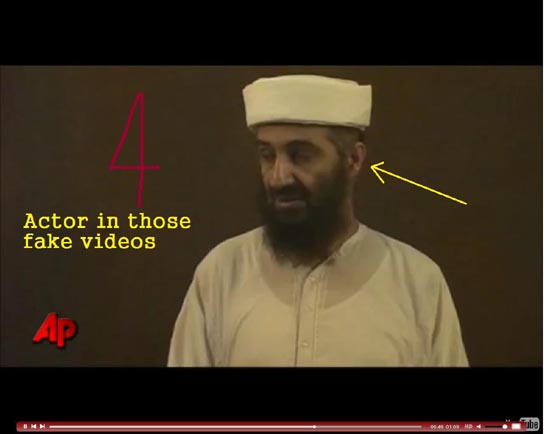 SLOW KILL : Why Are The Controllers Poisoning Us? Water & Air (Part I & 2)

January 9, 2016
Slow Kill – Why Are The Controllers Poisoning Us? Part 2: Air
Read more