There are many things happening right now to us energetically. It’s coming to us through many different forms such as Gamma waves, Solar flares, Photonic light-waves and even with the Schumann frequency being off. That’s the heartbeat of the planet that is measured can be seen and measured by NASA from space.

There’s a bifurcation taking place and a separation of densities. This is going to bring a lot of things to the surface and they will create lot of triggers that will come up to trigger you into old judgments.

Some of the things you may have dealt with in the past will be re-triggered and they’re coming up for release.

3. Feeling the need to move

There will be many that will move geographically from one location to another simply to ground in a frequency to the planet that is needed in the location that they’re being moved to. I, like everyone else, am going through exactly my own stuff and work, as well.

4. Bringing in the Crystalline Consciousness template

There is a overwriting of templates from the past as we are being updated. We are also receiving new template codes which are throwing us off balance.

We are taking on a Crystalline Consciousness and merging with the higher self. We are dissolving beliefs that no longer serve us, or will be needed anymore, as we move forward and begin to open up and receive feelings of Bliss and Divine Love on many levels.

Some will be dealing with chaos as others with bliss. I suggest you try to stay in a place of observation from a point of sacred neutral and don’t judge. Everybody is going through this differently and it is affecting everybody. As I’ve always said, we’re living on the edge of change and it’s happening in a way we don’t understand because it’s never happened like this before.

6. Some people may exit early

There will be many that will not be able to receive the energy and they will leave the planet, but this is what was agreed to before they incarnated on a higher Soul level. They that chose the path to leave will continue their work on the other side of the veil.

There will be much miscommunication coming to the surface. Miscommunication is becoming more intensified. I want you to be aware that it can also affect you. It can affect your ability to communicate, even with yourself and your internal dialogue.

There is a subtle process going on and how you are relating to yourself. There is communication that comes from your light body and from your inner self to your conscious self and ego. The filtering of all messages and communications is somewhat clouded for most people during this time as the shift is taking place.

There will be much stuff going on with memory and memory loss. It will be affected and influence more in the now moment. We are going to a place we never gone before and it is happening from a point of creation that we are creating in each moment. That is one reason for the memory loss. The other reason is to keep you in the ever present moment of now time which is considered 5th Dimension.

I will even go as far to say that linear time as you know it, which is a social agreement, is on the edge of change. Linear time is there to slow things down so things don’t manifest and happen so quickly. It is known as past, present, and future but time is moving and picking up for many very, very quickly.

10. Light may emit from your pores

We are, in fact, moving from Silicon to Crystalline on a Cellular structure. Many of you will be able to take pictures and see it in your skin.

The three pictures below shows the crystalline form being activated. The 1st and 2 picture (left and upper right) are from some month’s ago as I was motivated to take pictures by my friend, Gregg Prescott, The 3rd picture is from a few weeks ago.  You can see the changes that have taken place with the light as it becomes integrated and densified. 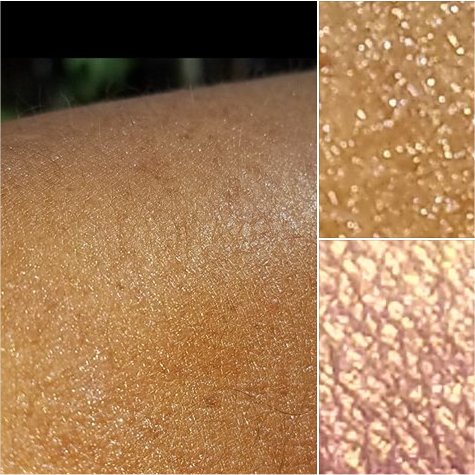 Even the pictures that were taken some months ago have completely changed to a brand new level of light integration. The Mitochondria is changing in form. The Mitochondrial houses the RNA and DNA and for some it is becoming completely unrecognizable.

Most in the more advanced stages will need a great deal of rest. It will be one of the greatest things you can do for yourself.

Many will be dealing with weight gain to make space to hold more light, which is needed to create the crystalline form.

15. Moving in and out of dimensions

You are in the interim period

Please know you are in the interim period. You are getting ready to receive new abilities. The division between where you are now in your ability to communicate and understand and where you are going to be is actually quite major. You are into a limbo zone so to speak.

Just know, wherever you are on the path, everything is exactly the way it needs to be in this ever present moment of now. No one person is more advanced than another; it’s just that some people are in different places acquiring different skill sets and utilizing different tools to fill their toolbox up.  These tools can be used once the physical Avatar is ready to incorporate an update and integrate all the new technology.

So, just to bring clarity, we are in a transitional moment between an old paradigm and moving into a new paradigm. But also understand that the new program that is being integrated is not fully functional at this moment, as it is not totally in place.

Also, be aware that we are living in a world of duality, which has polarity, and we are also experiencing on a global scale polarity coming to the surface.  It is coming to the surface through chaos and disorder. It is almost like a solid foundation is being placed as the polarity begins to leave the planet.

Please be aware of those that have not shifted to a higher frequency.  They will not be able to have the ability of perfect understanding of what’s going on because they will still be living and experiencing the denser energies of what is known as the old paradigm of past.

Please know everything is playing out exactly as it needs to, even if you don’t fully understand it.

I hope this helps bring a better clarity of what is happening.

With the Deepest of infinite love and blessings always in all ways.