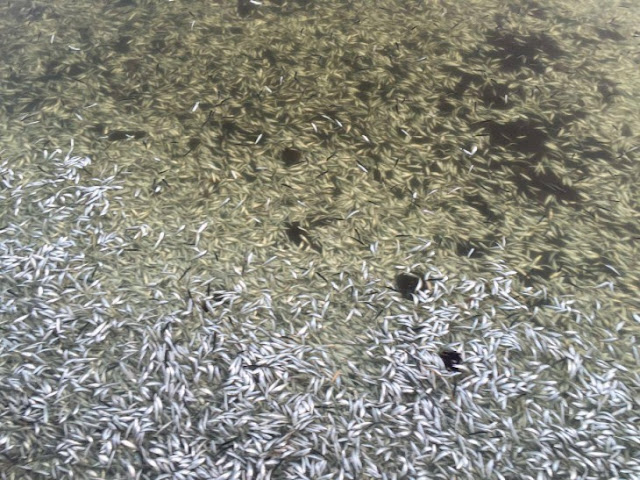 Photo Rodrigo Aguilera (RBB)
They have almost disappeared along the west coast of the US but the life of a sardine is not all that it should be off the west coast of South America as 1,000 tonnes of the small fish wash up along the coastal region of La Araucania, Chile.
Fisherman were shocked at the sheer size of the mass stranding of sardines
According to preliminary reports about a thousand tonnes of dead sardines along the route navigation by the entrance of the river, where they take to the high seas in the Queule cove.
The entire estuary is full of dead sardines, the deaths are thought to have been brought on by a natural occurrence?
However, the experts said that this situation will have health consequences for the strong odours that emanate as the fish begin to rot.

Mystery over a tons of dead fish washing up on shores of Bolivian lake: Equipment to help oxygenate the lake was not working!

Another 100 dead turtles off the Southwest Mexican coast now approaching 1,000….